The indigenous cultures first enticed ducks and geese to approach decoys woven from nearby reeds and grasses. Neither they nor the generations of artists who’ve followed could ever have anticipated how decoy collecting would become a high stakes game with extraordinary prices and obsessive collectors. These weathered wooden duck decoys may sound quaint, but this past summer, Guyette and Deeter Auction House sold an antique mallard hen and drake for $1,144,600.
The pair were carved by the legendary Caines Brothers of Georgetown, South Carolina. Thought to have resided on South Island, South Carolina, these mallards may well have been hunted by President Grover Cleveland, a frequent visitor. Prior to the sale they were owned for 90 years by the Yawkey Family, former owners of the Boston Red Sox. Tom Yawkey’s bequeath established the Tom Yawkey Wildlife Center Heritage Preserve on South Island. In a sense, the mallards’ migration was complete. 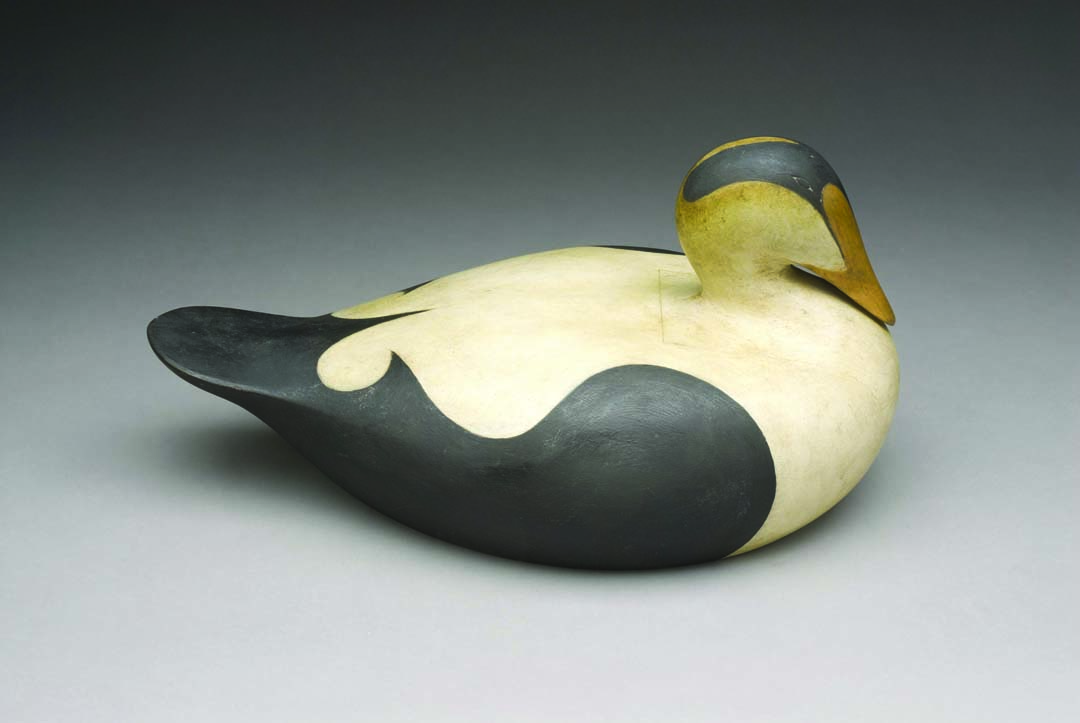 Also this past summer, Copley Fine Art Auctions sold a Canada goose by an unknown carver for $810,000, the third-highest price paid for a single bird. What set this bird apart, according to Copley’s decoy specialist Colin McNair, himself the son of a famous carver, was a combination of exceptional characteristics.
“This goose was extremely rare, compared well with contemporaneous decoys and, while carved by an unknown craftsman, that maker had made a distinct number of birds,” McNair says. “It also has great authenticity and provenance, or record of ownership, having been held by a renowned collector. We looked at x-rays and the materials used to give us some clues, so it looks like it was made back before 1880, based on nails in the piece. The fact that the head was removable only added to its allure.”
The first person to look at a decoy and see it as folk art was Joel Barber more than 100 years ago. In 1935, he published Wild Fowl Decoys, giving artistic merit to the utilitarian objects. In 1965, decoy expert William J. Mackey Jr. published American Bird Decoys and Adele Earnest published The Art of the Decoy: American Bird Carvings, further legitimizing the folk artform. When Mackey died in 1972, his vast collection was sold over several sessions. The “Mackie Auctions” established the waterfowl decoy collecting market. 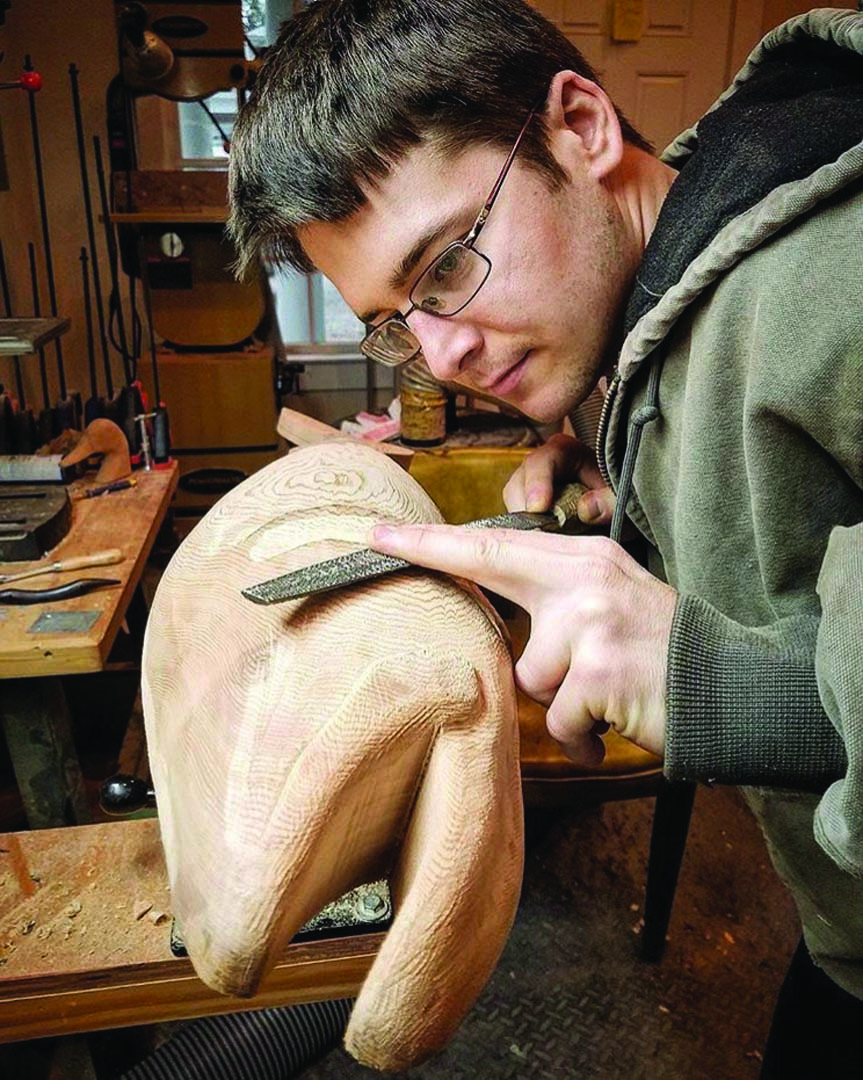 Colin McNair carved his first decoy – a ruddy duck, when merely a child in his father’s workshop. Jon Deeter, co-owner of Guyette & Deeter Decoy Auction Firm, received his first decoy as a present from his wife, who brought it home from her dad’s collection. He describes the duck, a bufflehead covered with several coats of oil paint, as an old workhorse from the St. Lawrence River region of New York. Still, he became hooked on collecting.
He joined the newly named Guyette & Deeter in 2010. The auction house has sold $180 million in decoys and other folk art since its founding in 1984. Specializing in vintage wooden duck decoys, they auction between $7-10 million annually. “The market for vintage decoys is very strong,” Deeter says, “It represents what we call the ‘Other Season’ for many outdoorsmen, the rest of the year after the hunting season closes. Duck hunting may last 60 days, but decoy collecting allows you to hit the same synapses of your brain because it keeps you in the same genre of what you enjoy. You can still learn and ‘hunt’ preferred decoys for your collection.”

“You have to get your disciplines down, perhaps focus on the region where you grew up or where you like to hunt.”

As popular as decoy collecting has become, Deeter advises novices to refrain from jumping in right away, but rather read up on the subject, or give him a call. “The last thing I am going to say to a new collector is to go out and buy some decoys at one of our three auctions,” he cautions. “You have to get your disciplines down, perhaps focus on the region where you grew up or where you like to hunt. I also recommend you find a mentor, somebody who can help you really understand this.”
Not surprisingly, Deeter, who likens duck decoy collecting to that of wine, greatly enjoys working with new collectors. Guyette & Deeter will coach a client on why and how to build a collection. (One of their favorite new collectors is Dallas Cowboys physician Dr. Dan Cooper – see sidebar.) Clients, he says, are not only drawn to vintage decoys but are increasingly interested in contemporary carvers.
Given his talent, it’s entirely possible 26-year old Spencer Tinkam’s efforts may one day fetch millions, though it’s doubtful such thoughts have ever entered his mind as he carves in his workshop where he also posts how-to videos to his YouTube channel. When he was 8 years old, Tinkam’s beloved grandfather covertly gave him a pocket knife for his birthday. He was already obsessed with waterfowl, having ventured out on the pier near his family’s northern Virginia home to draw in rafts of canvasback and “black heads” (greater scaup) with his bread handouts. Considered too young to hunt waterfowl with his grandfather and father, young Spencer Tinkam began carving wood in the primitive shapes of the local ducks who migrate and winter on the Chesapeake Bay.
“It was how I connected with waterfowl,” Tinkham recalls. “I was already thinking about decoys down the road. My grandfather passed away from cancer the following year after giving me my knife so it was also a way to maintain our connection.”
Origin stories for duck decoy carvers are as fascinating as the tales of any artist in any genre. They often share an early love of birds and they inevitably come from hunting families who live near key waterfowl migration routes, be they the Chesapeake Bay, the Great Lakes or Midwest Flyways, among others. The duck decoy has existed almost as long as there have been ducks. The community of carvers and collectors is remarkable: Spend time with a carver, a collector or auctioneer and you quickly learn they all know each other on a first name basis.
Patrick Godin, a multiple World Shooting Rig Champion carver based near Long Point Bay, Ontario, is very aware of Spencer Tinkam’s emerging work. Growing up, Spencer used the many contests and exhibition shows as his classroom, probing well-established carvers like Godin with questions about technique from tool use to paint types. Following the advice from one expert, he now makes his own paints using oils and pigments. Godin says the congeniality among artists remains the finest virtue of his profession.
“There are lots of fields of art where people are very secretive,” Godin says. “Decoy carvers are willing to share what they do, how they do it and their philosophy. When I started we had a real intense passion for the bird and we just developed our own methods of doing things. There were about four of us at the time who chose to make a living at duck decoys and bird carvings, everything fell into place just right for us. Thirty years later, it’s the only job I’ve ever had. Spencer represents the new generation and will go far. He has that combination of a fine artist’s eye and great touch.”
Jon Deeter also admires Spencer’s growth as a carver. Colin McNair’s appreciation goes even further: A Spencer Tinkam commission sits on McNair’s desk in his Boston office.