Laying Down the Bacon – Hunting Hogs with Casey Donahew

In Texas, there is a hog problem, and it is spreading. Hogs destroy crops, valuable land, and even run off deer populations. So when I was asked to not only go on a hog hunt, but also to do so at night (when it is much cooler), with thermal optics, and with country music celebrity and Pulsar pro-staffer, Casey Donahew, I didn’t hesitate one bit.

We pull in to Executive Outdoor Adventures at the Sullivan Ranch after a short drive from Dallas. We’re greeted by sprawling wheat pastures dotted with patches of trees, ponds, and scrub brush—a nice change from the hot asphalt and traffic of the city. Arriving about the same time as Kevin Reese, Pulsar Field Instructor, we unload our gear.

Soon we meet Riley and Cody, our guides for the evening. After a good conversation full of laughs, we sit down for a phenomenal steak dinner prepared by Miss Tara, complete with all the fixin’s. Baked potatoes, fresh snapped green beans, sautéed onions and peppers, followed by peach cobbler are on the menu. After dinner, we have about an hour and a half left of light, so we load up the buggies and take off to the range to zero our weapons.

Kevin mounts our guns with Pulsar Trail XP50 LRF thermal riflescopes and hands us a selection of thermal monoculars for navigation. We proceed to send rounds down range at a heat splash target, check our zero, adjust accordingly, and head back to the lodge. Shortly after that, we’re on our way to the Red River to hunt on a 1,200-acre plot of land. 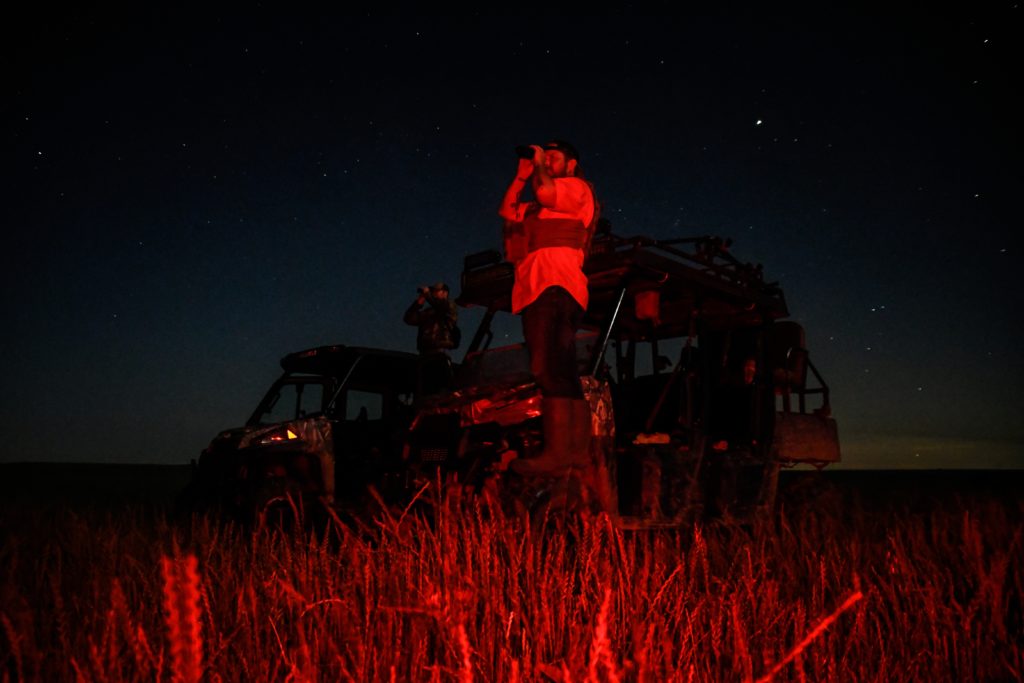 Hogs have a distinct smell, and if the wind is blowing just right, you can catch the musk—when we step out of the trucks, the scent of pigs surrounds us. We give our gear a final check and receive a safety briefing. When hunting at night, there are some inherent dangers, especially with loaded weapons.

“One, make sure the barrel is pointed in a safe direction at all times. Two, always travel in single file. Three, establish a signal system,” instructs Cody.

We drive across the pastures, piercing the darkness with Pulsar XM30 monoculars instead of headlights. Cattle are grazing, coyotes are on the prowl, and the occasional jackrabbit pops its head up as we drive by. All of this can be seen because of our thermal optics. Sweeping the dark landscape with the XM30s instead of our guns, we are looking for signs of a sounder mixed in with the cattle.

Night hunts are intense. They’re such an awesome and different way to hunt game, because there’s more of a predatory element to the situation. Your senses are elevated, your adrenaline is racing the entire time, and there’s a predictive sensation of panning a thermal optic across a field hoping to land on a lone heat signature. 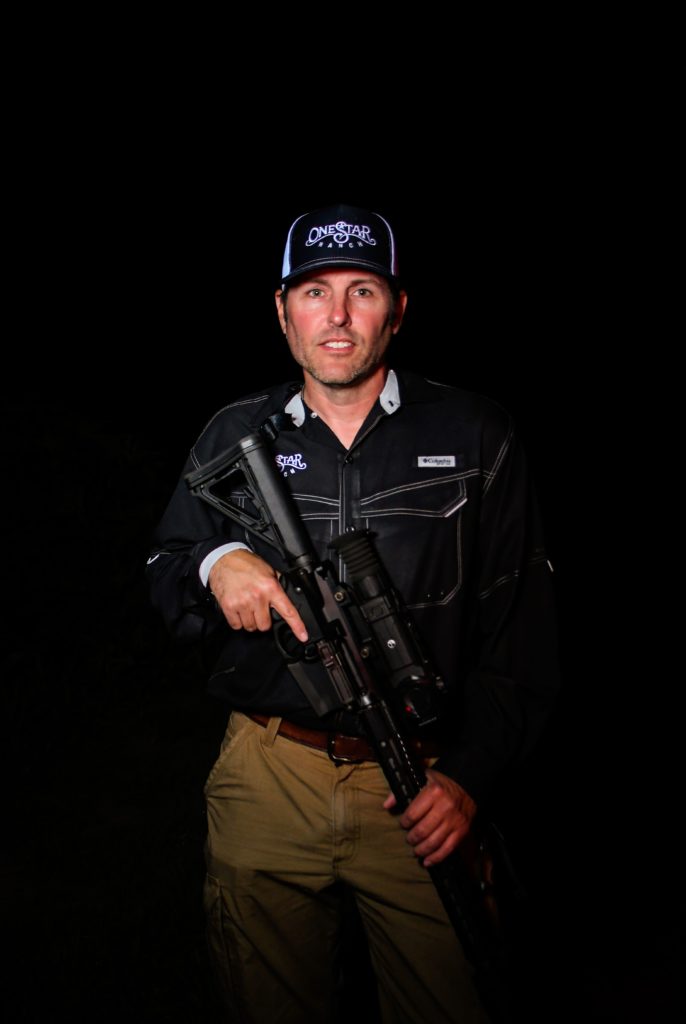 Along on the hunt, is Casey Donahew. Casey has made a successful career out of picking his guitar and stringing words together. He also has a passion for hunting. He started when some friends talked him into hunting dove, and he’s been hooked ever since. So naturally, after years of stalking and hunting numerous species of game, he has developed a passion for the preservation of the lifestyle that we outdoorsmen live. Because of that, he bought a 500-acre ranch in Throckmorton, Texas, where he runs cattle, raises game birds, and guides on exotics and whitetail, with the occasional hog cull. With all the corn and feed, come feral pigs, so naturally with his entrepreneurial spirit, he started “Casey Donahew Outdoors.” Pulsar partnered with him, and he since has seasoned himself into an effective predator of our destructive friends— the pigs.

H&B: How did you start hunting?

CD: I bought a Browning over and under, then I just starting shooting trap and skeet, and eventually I went out dove hunting. Then I branched into whitetail deer. I went from a few guns, to a walk-in gun case… Now I’m kind of a gun freak, like that guy from the movie Tremors I guess,” he says with a chuckle.

H&B: What spurred the formation of Casey Donahew Outdoors?

CD: We live in a world of growing anti-gun feelings…it seems like we live in a world of anti-everything actually, and I just wanted to be pro-something for a change. There’s a duty to be a steward of the land. There’s also a conservation side of hunting that is constantly overlooked. The management of certain populations is imperative to their survival in the area. When you drive through an area, and you see these deer that are the size of Dalmatians, they look sick! There’s not enough food for them, and the increased population allows disease to spread. And then there’s the hogs.

H&B: Tell me about the hogs. We all know that they tear everything up, and the gestation period is only 3-4 months…

CD: I was reading somewhere that Texas hunters killed 3.5 million pigs in 2016, but what we should’ve shot was 7 million to control the overpopulation. We were halfway there then; there’s no telling where the population is now.

Glassing through his monocular, Cody spots what appears to be pigs. Casey and I are standing 300 yards away and ready to do our part. So we hop out of the buggy, line up single file, and start walking. The wind is blowing quarter from our back left, and the boar is quarter to our front left. So we veer straight and right to keep us well out of “sniffin” range of the pig. Riley is leading us, and he stops every 30 steps or so to key on the boar so we don’t lose him. 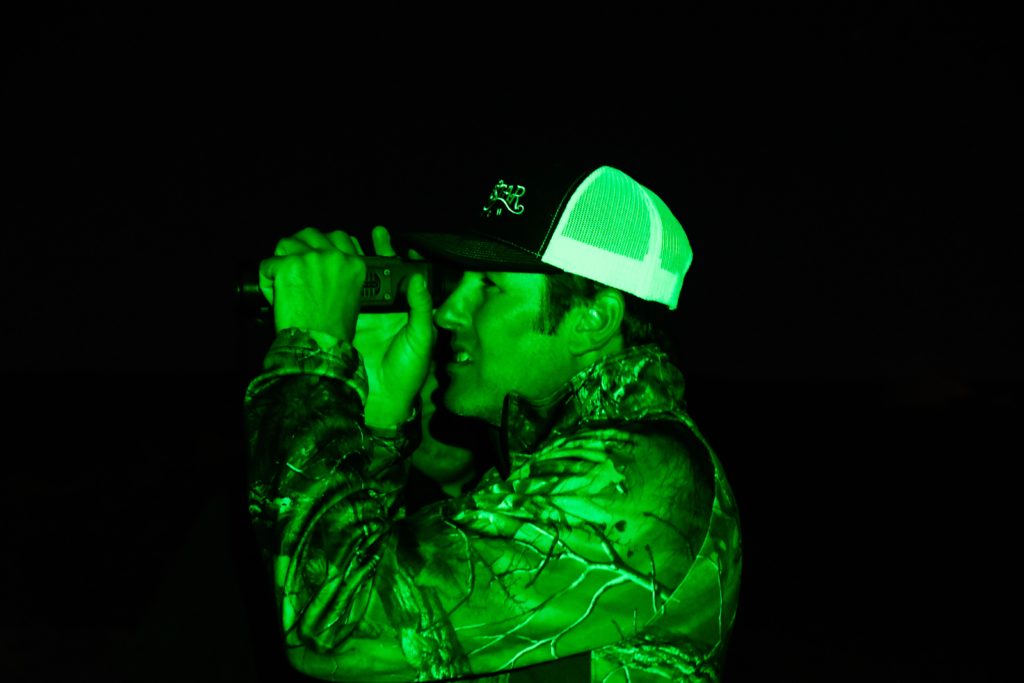 When you can’t see your target, you have to know their possible and probable moves. Much like playing defense in football, you must know the tendencies of the opposing offense to be even remotely successful. Riley strategically plots our course and positions us 40 yards away. Rifle raised, camouflaged by the darkness and with the boar in our crosshairs, we take the shot. Success.

Night hunts for hogs are a step outside the norm for most hunters but such a pleasant change of pace. Additionally, it broadens a hunter’s versatility and skills, awarding cross applications of those skills to the normal hunting styles. The main problem most hunters face however is access and how to begin that process. I suggest calling Executive Outdoor Adventures. They will set you up with all the right gear, outfit you with experienced guides and put you on sounder after sounder. Happy hunting.