by: Dustin Catrett
A Florida Lure Maker Comes home to Texas.
Idling into the Lower Laguna, the eastern shore is barely visible from the haze of Saharan dust sweeping across South Texas. “Prepare to get sandblasted,” said Mark, before hammering the throttle on his Maverick skiff. The hole-shot floats our breakfast bag up into the air pinning it against the rear jack plate. Oblivious to the rescue at hand, he’s deep in thought, anticipating where yesterday’s redfish might turn up this morning while I belly crawl to retrieve our lunch from the roaring outboard. Eventually our burritos are safely in hand unbeknownst to Mark, and a short while later we reach our destination just as the sun is beginning to rise.
Back-dropped by the unique southwestern flora of the Laguna Atascosa National Wildlife refuge, we drift momentarily over a shallow bar blanketed in shoal grass with mullet dimpling at the surface. Savoring his last sip of coffee, he reaches for one of the many plastic lures scattered around our feet. “Texas croaker,” he grins, examining his newest creation as a lapidary would a diamond. He motions for me to stand on the bow then corrects the boat’s direction with the push-pole, pointing us to a patchwork of sandy potholes in search of tails, backs, or anything else that looks fishy. 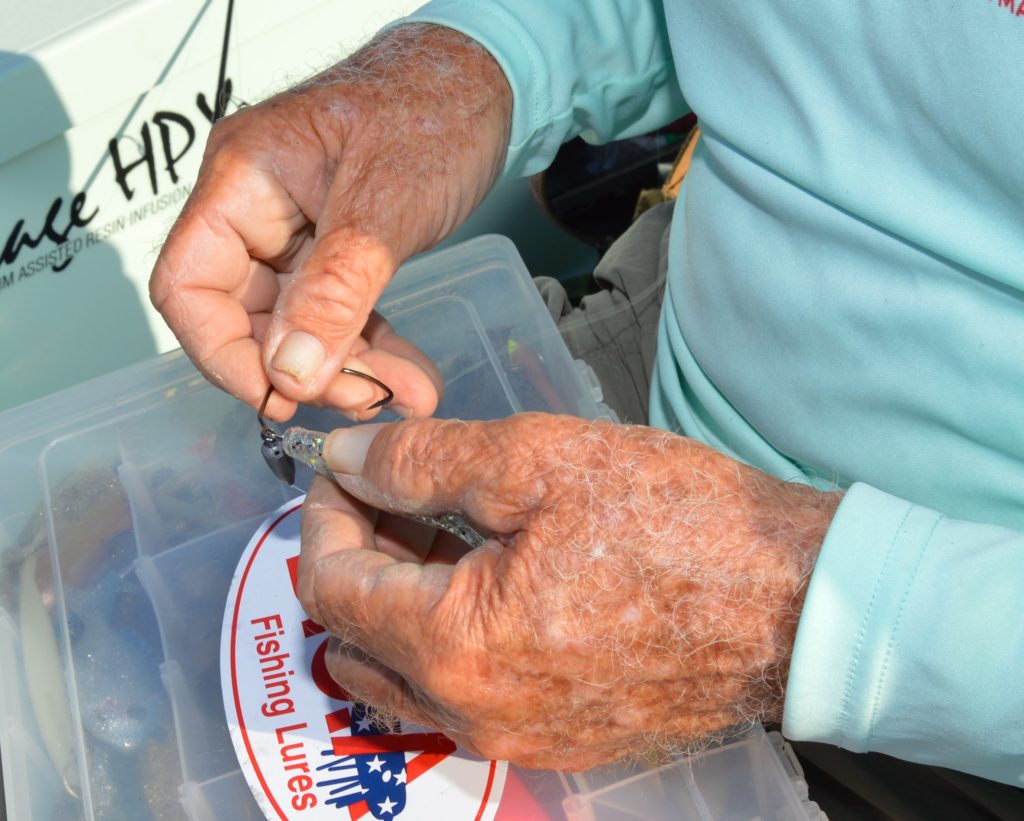 “Eleven o’clock – redfish,” he says, and I quickly cast towards a single tail flagging against the shoreline. “Way left,” he sighs, as I frantically retrieve the plastic jig across the surface. “Try again, nine o’clock – bout ten yards,” This time I short cast just in front of the cruising fish and it charges the offering. “Groovy!” Mark laughs, as my rod bends to the whine of the reel’s drag. Seconds later he’s also hooked up with a stocky seatrout, and after a brief tug of war we both hop down from our posts to land and release our fish.
It’s as good as it gets.
After seeing, casting, and catching another half a dozen or so redfish, we drift over a large area with prop-scarred seagrass crisscrossing in all directions. A half mile ahead, a shower of mud and water sprays from under a tunnel hull stuck on a bar. “They don’t know what they’ve got do they?” I ask, as Mark squints his eyes to see what the commotion is all about. “No, I don’t think so.”
The reminder is painful, juxtaposed against this pristine fishery is a lifetime of memories harkening back to the hey-day of his home water – Florida’s World Famous Indian River Lagoon. Home to the world record seatrout, the Mosquito lagoon and its giant bull redfish, and near its southern end – a tidal utopia where forty-inch snook stack like cordwood in a Bahamian blue paradise. Gone. Reduced to a barren wasteland devoid of grass, fish, and anything else in higher order of a horseshoe crab. The result of a few weekend Joes stuck on a sandbar? No, a much larger problem. One that involved polluted discharges, politics, and governmental mismanagement that crippled the estuary to its ecological tipping point that ended with the decimation of what may have been the greatest inshore destination in the country. 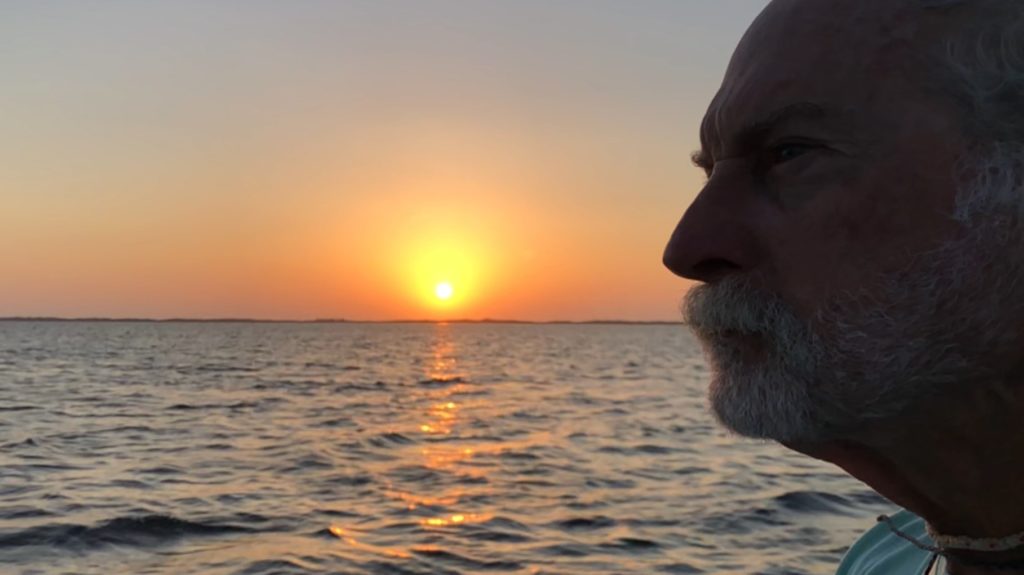 But over a thousand miles away Mark’s seems right at home here on the Laguna. Truth is he’s actually a Texan. Born Mark Steven Nichols to a Galveston shrimp boat captain, He grew up working on his father’s boat before graduating High School and heading up to Durango Colorado to pursue adventure – in the form of fishing. A free spirited product of the 60’s, he once partied with Jerry Jeff Walker and Willie Nelson at a roadside swimming hole, in the 70’s hiked the Mexican Baja for months living communally with strangers, and on one blood red sunset watched in solitude as pacific whales eclipsed the sun. He was datsuzoku long before backpacking hipsters discovered it as a word. But it was his love of fishing and possibly a woman that led him east to Stuart Florida – at the time an inshore fishing mecca where since the late 1980’s he’s been creating soft plastic lures for anglers all over the world. 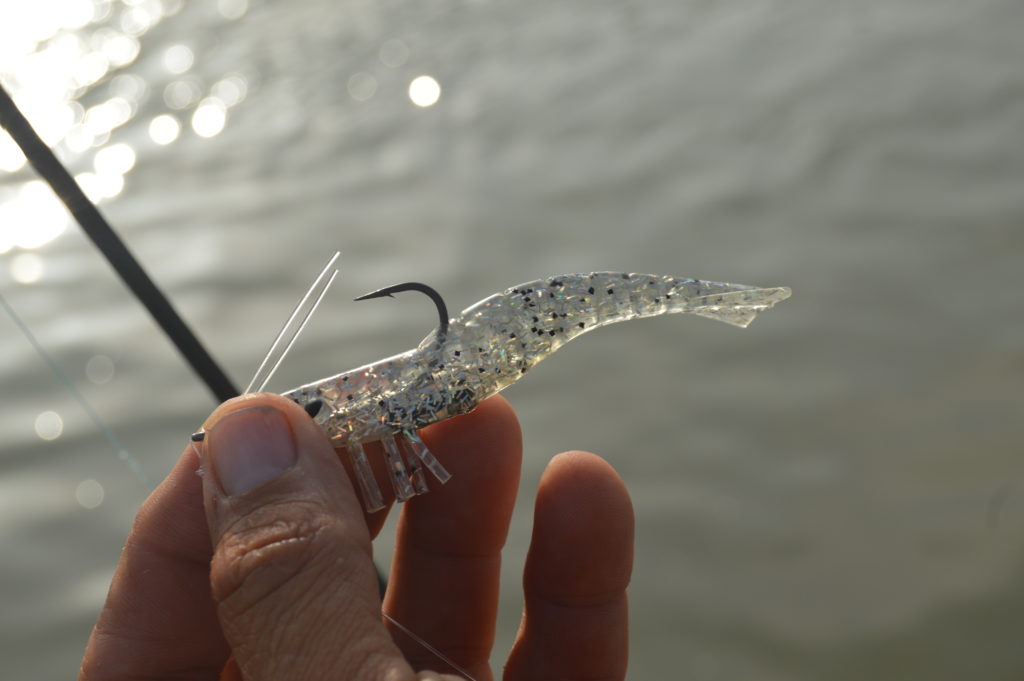 As earthy and approachable as he is, Nichols place amongst tackle industry giants can’t be overstated. Fred Arbogast and Lauri Rapala, to contemporaries like Patrick Sebile and Gary Yamamoto all share the same intangible – creating lures that will catch fish. Which in Mark’s case happened one afternoon in 1988, where on his kitchen table he carved out what would become the first and most sold artificial shrimp lure. As the demand for his creation grew, he crested his company with three red Helvetica letters – D.O.A (Deadly On Anything) and for the past thirty years this Made-in-the-USA plastic crustacean has weathered thousands of imitations, either mass produced by corporate backed competitors or blatant Chinese knockoffs sold for half the price and he’s still here. Still proudly crafting lures in a small shop back in Stuart Florida “bout a mile down the road,” from his house as he says, testing them on the water one trip at a time. Now in his late sixties, the day-to-day task of running the business is left to a team of competent employees most of which have been employed with the company for decades while Mark grooms the next face of his brand through media events, shows, and photo shoots. “Ed’s a great ambassador for DOA and will do a fine job taking this thing to the next level,” he says of his protégé Captain Ed Zyak, former FLW tournament pro and currently DOA’s Marketing Director. “It’s in good hands,” he smiles, while rigging another lure to cast before it’s time for lunch. After catching one last redfish he pulls down his buff and opens the bag of wrapped burritos. “Stripes,” he says, biting into the chorizo and potato filled tortilla. “I could get used to this.”