Whiskey Myers – Something You Don’t Understand

As he walks through the concourse of the Grand Theater at the Choctaw Casino & Resort in Durant, Oklahoma, Chris Alexander passes a row of posters promoting the headlining acts who are set to perform in this venue in the coming nights.

“Reba,” he says, emphatically reading aloud the first of those signs and allowing its single-name gravitas to hit before he moves on to the next one.

“Eric Church,” he notes, pointing toward the second poster in as many paces that touts a country music superstar playing this casino’s stage.

Finally, he parks himself in front of a third poster — one touting the show that’s set to take place later on in this late June evening. And, almost involuntarily, he lets loose a laugh as before he can read it. 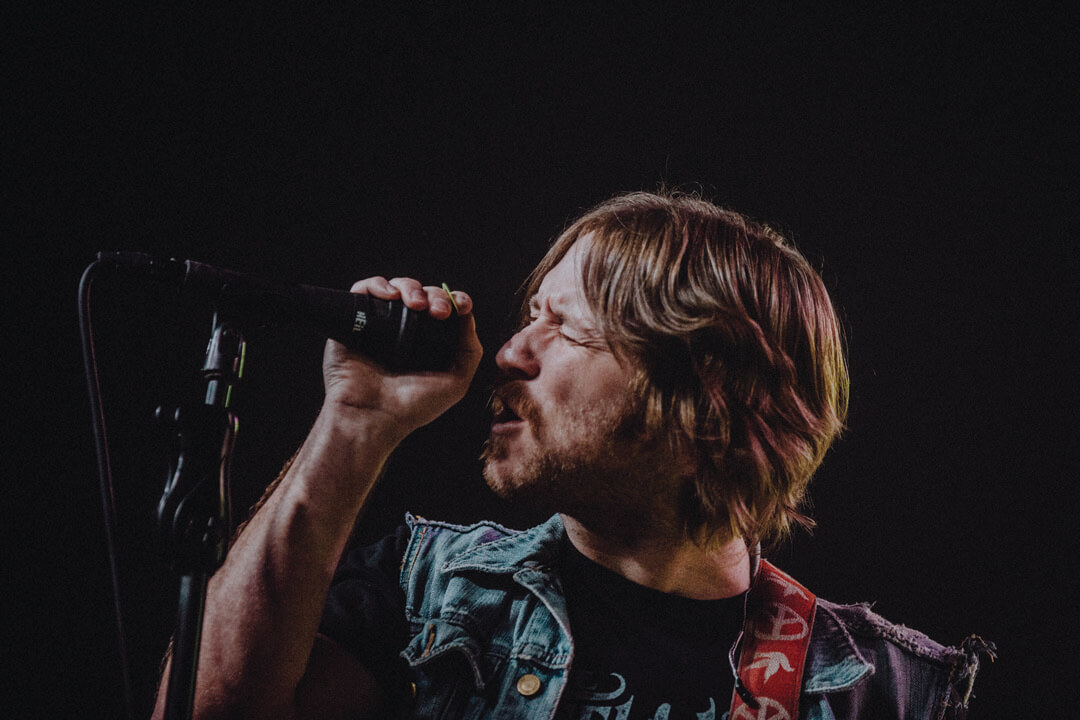 “Whiskey Myers” he finally says, the pride in his voice belying his head’s shaking in disbelief.
It’s a cool, if telling, behind-the-scenes reveal from the guy who’s been acting for over a decade now as the tour manager for that raucous East Texas-sprung band. (That’s right: Band. None of Whiskey Myers’ seven members’ names even closely resembles the moniker the band mysteriously chose to represent their collective upon forming in 2007, and they’re still staying mum on why they chose it.) Over the course of Whiskey Myers’ 11-year ascent from bar band to casino circuit headliners, Alexander has had a front row seat to all the action, riding shotgun as the band’s embarked on its sharp, riff-filled ascent. Outside of the band itself, he’s the one person who truly understands all the hard work – the late nights, the long stretches away from home, the cramped tour bus sleeping arrangements — that it’s taken to get the group from there, as a band of small-town southern rockers just trying to score some gigs outside of Texas, to here, where it boasts more than 68 million Spotify streams, plays sold-out shows to thousands of adoring fans on a near-nightly basis and no longer finds much novelty in overseas tours, the most recent of which the band just wrapped up before the string of dates that took them to this Oklahoma stop. Perhaps since it’s his job, Alexander tends to pay that stuff more mind than the band’s actual members do.

Sure seems that way, at least.

“Hey, we’ll play wherever they’ll ask,” Whiskey Myers frontman Cody Cannon says in his standard aw-shucks tone while sitting around backstage, having just put down the acoustic guitar he’s been using to help shape a song that he’s been slowly but surely crafting while on tour the last few weeks. Or, wait, has it been months? It’s so tough to recall: “Last night, we played a show in Kansas City. Or, actually, it might’ve been Arkansas. I’m honestly drawing a blank right now. We played Paris and some other European dates about a week ago…”

Not remembering the specifics in the moment visibly frustrates Cannon, as does the self-doubt that follows it. It’s a surprising look considering its stark contrast from the swaggering persona Cannon will wear on stage, maybe a hundred paces from this room, just a few hours later. The same can be said for his outfit: In the black Bass Pro Shops baseball cap, white tee and dark gym shorts he dons back here, it’s tough to imagine him as the ‘70s-looking, paisley shirt- and jeans-rocking hell-raiser he’ll soon become when placed in front of a crowd.

But that’s the line that Cannon and his Whiskey Myers bandmates regularly walk. Theirs is a balancing act, one that weighs idealized posturing rock ‘n’ roll avatars against relatable next-door types who pen songs that cut through to their audience’s core. 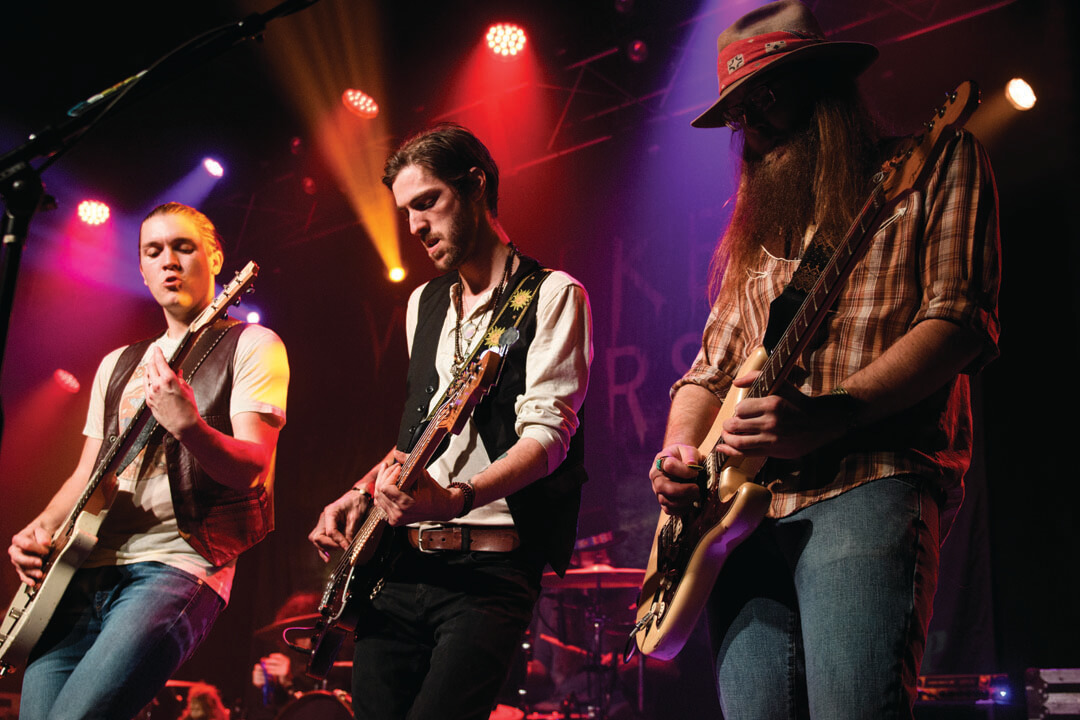 Whiskey Myers may be currently at work on its fourth full-length album — and seen its songwriting vastly mature with each subsequent release – but the song that still best exemplifies the band’s ability to resonate with its target demographic is its breakthrough, very-first-released single, 2011’s “Ballad of a Southern Man.” A Red State rallying cry, the song is fairly unabashed, what with its lyrics about pledging allegiance “the original way” and saying “Merry Christmas not Happy Holidays,” not to mention how it shrugs off anyone who scoffs at these notions as people who project their own values onto “something [they] don’t understand.” Coupled with lines about fishing in creeks, drunken family confrontations and rifles being passed down from one generation to the next, the song’s lyrics are about as upfront a declaration of a band’s values as one’s likely to ever come across. But it’s the wistful tone of the music that really gives the song its layers and leads different audiences to hear different things; whereas one listener may hear the song as a nostalgic paean to increasingly bygone times in the American South, another might interpret “Ballad of a Southern Man” as a somber plea for more honest discourse about heritage throughout our nation.

For his part, Cannon isn’t providing any answers as to how he intended the song to be received. Rather, he actively avoids questions about the meanings of his songs or what he reactions he aims to elicit form his audiences with his lyrics.

“We’re just country boys trying to play rock ‘n’ roll,” he says when pressed. “Past that, we really don’t think too deeply about what we’re doing. We just write songs, go up there and play. I will say that I do like writing songs about blue collar stuff — hard workers, things like that – but just because that’s the backbone of society. But it just comes out like that; it’s not forced. We never know what’s gonna resonate with people, and we don’t try to figure it out.”

Still, Cannon does cop to using the word “southern” quite frequently in his songs – “I probably use it too often!” he laughs – and acknowledges that fishing and hunting are tropes he often finds himself returning to during his writing sessions. But that, he says, is just a factor of writing what he knows and thinks most often about. In that regard, it’s no surprise that he writes so many songs about missing his home and wishing he could be out hunting or fishing with his family.

“I’m a better bass fisherman than I am a musician – I swear, I am!” he says, grinning real wide. “I’m from nature, man. Just a country boy from out in the sticks. All of us, we grew up out in it – and, me, I still live out in the country. I just love it. I could never live in a big city or anything like that. I’d freakin’ blow my head off — it’s just not for me. I mean, I guess it’s pretty cool I get to experience the city life when I’m on tour or whatever. But I still get to go home to where there’s nobody around at the end of it all. And nature? That’s everything to me. Me and my fiancée, will just sit on the porch at night, listen to the coyotes and be like, ‘This is great!’ There’s no noise from the city or anything like that. Life in the country — just the overall quality of life there — is so great. It all slows down.”

In other words, his home life is the exact opposite of his work life, which on this day is made all the more hectic due to friends who made the trip to the casino to catch this evening’s show. As they make their way backstage one by one to say hello, Cannon diligently exchanges pleasantries with them all before eventually excusing himself.

As Cannon and his bandmates head out to their tour bus to steel and ready themselves for the gig, they leave their pal Alexander to tend to whatever final details need to be taken care of before the rest of the crowds begin to show. Standing on the stage as its various hands set up the night’s gear, he looks out on the vast space that the band he works with is about to completely own and reports that tickets to the night’s show have been officially sold out.

Cannon and the rest of the band might not pay such facts much mind, but Alexander can’t help himself. He cracks another wide smile.

Asks the tour manager of no one but himself: “It’s pretty cool, huh?”