Jalisco
by: Dustin Catrett
The quest to grow the world record largemouth bass
Deep in the south Texas brush country within the famed Tecomate La Perla Ranch, is a lake named Jalisco where efforts are currently underway to grow the next world record largemouth bass. “Jalisco was the name of the Texas A&I fight song my father used to sing when he played there back in the 40’s,” said ranch owner Dr. Gary Schwarz, as we drove past acres and acres of lush green food plots on our way to the lake. Schwarz, who many recognize as the co-host of The Bucks of Tecomate television show and founder of the Tecomate Seed Company that in the late 90’s revolutionized growing big white-tailed deer using dry land food plots, is the architect of this 60 acre bass utopia and its predecessor Lake La Perla which produced a fifteen pound lunker in 2016. After decades of growing giant whitetail deer including the iconic Realtree Heart-Attack buck, the 66-year-old McAllen native is in pursuit of his most ambitious project yet in hopes of growing the next world record bass. In the song the words “No Te Rajes” which mean never give up, resound deep in the oral surgeon’s soul. “Jalisco is the embodiment of my belief of never giving up, and the pursuit of making Texas the home of the next world record.” 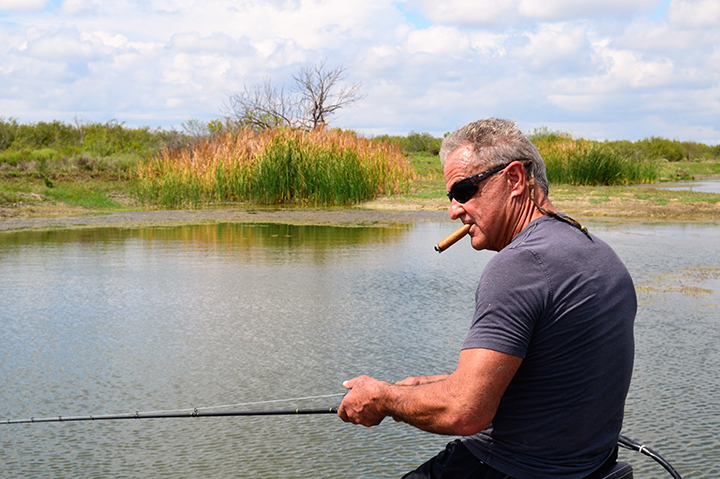 No Te Rajes
Growing up in Orlando Florida under the shadow of Mickey Mouse, I was mesmerized by my television each Sunday when Gary and co-host David Morris would rattle up giant whitetail bucks from the brambles of this unique brush country in south Texas. But by the late 2000’s, the exuberant doctor that lit up my screen for so many years seemed but a shell of his former self. After being falsely accused of Medicaid fraud in 2010, his passion that once ignited a revival in whitetail hunting was all but gone. After a grueling year of legal battles he found himself exhausted, drained, and fighting with all that was left to prove his innocence. After what culminated into a two week trial, the jurors seated in the small McAllen courthouse eventually found him not guilty on all charges brought against him. Emerging outside surrounded by family and co-workers he fought back tears of joy relieved the yearlong nightmare had ended, but the ordeal had clearly taken its toll. “I gained a lot of weight, I was depressed, and at times felt helpless,” he said afterward, “But I’ll tell you my faith in Christ is strong, and through prayer I found solace in restoring my health.” Determined to move forward, Schwarz began a strenuous exercise and diet regimen that resulted in a dramatic physiologic change that saw him re-emerge as a fit sixty- something picture of health. Now setting his sights back on his world record project, Jalisco became the battle cry to seeing it through.
Jalisco
Unfortunately in 2014 while busy digging a portion of the lake, another setback befell him. While driving a bulldozer he slipped and fell from the machine slamming his head onto its steel track which caused severe head trauma that left him seriously injured. “I could actually feel a part of my brain when I reached up to touch my head, and I knew I was in trouble” he said. Miraculously after six long months of intensive rehab he did recover, and again continued to build his dream. By the end of the year the lake was complete, which saw a dramatic increase in the volume of forage ponds than that of La Perla which are used to grow shad, fathead minnows, bluegill, and prawns that are then released into the lake for added nutrition to the bass. Under a 15 year contract between Schwarz and the Texas Parks & Wildlife Department, the lake became the flagship of its Operation World Record research project that paired TPWD genetics obtained through its Toyota ShareLunker Program with Schwarz’s unique ecosystem in an effort to grow the next world record largemouth.
Super Bass

“A powerful thump jolted the line and I set the hook into what felt like a submarine.”

On average Florida bass grow at a rate of about a pound a year in ideal conditions making most ten pounders about nine to ten years old. Stocked with fry offspring from a pure Florida13 lb. female and the male son of another 13 lb. Florida behemoth, Jalisco now in its fourth year is producing double digit lunkers in less than half that time, demonstrating the accelerated growth rate Schwarz had been hoping for in his new lake. So much so that in 2017 he generously donated over a 1,000 of these supercharged bass to Lake Falcon to enhance its genetic pool. “It was a win-win. As part of our management program we electroshock and remove smaller fish, and by stocking Falcon with adult sized fish and not fry they have a much higher survival rate and becoming Sharelunkers,” he explained. During a recent sampling of Jalisco I was on hand to survey the fish’s size and aggression using rod and reel. Shortly after launching the boat with Schwarz, I cast a plastic DOA worm towards one of the brush-piles just off the shoreline, lifting my rod to feel the bottom. A powerful thump jolted the line and I set the hook into what felt like a submarine. After a few seconds my 50 pound braid went slack and the fish disappeared. “That was a hog man,” laughed Schwarz, as I reeled up to find my heavy gauge 4/0 worm hook almost straightened from the force. He followed up with a cast and was thumped before his worm could touch bottom. “Yeah baby!” he shouted, as his rod curved towards the brush. “Nice healthy fish,” he said, lifting it into the boat. “Want to take pictures later?” he asked, switching on the boat’s live well before easing it into the tank. “Sure,” I replied, but on his next cast his rod was almost jerked from his hands before he could set the hook. “Wow! Did you see that?” he laughed, as another huge bass breached the surface. “This one’s even bigger!”
After landing the big bass I snapped a photo of him with both fish before he released them back into the lake. “These fish are really healthy and growing just like we hoped,” he explained. “This is what I love to see.” The picture, beyond the two hefty bass that are only a few years old, depicts a very happy man, similar to the one I grew up watching on TV all those years ago. A visionary that challenged conventional wisdom, a fighter that never gave up, and later this year after Jalisco’s bass population is shocked and surveyed, hopefully that same euphoric Texan will jump and shout again in joy of his creation.