A Holiday in Southwest MO

You don’t need the beach when you can vacation at Big Cedar Lodge.

Parents who have done the parenting thing long enough will tell you that by and by, they get pretty good at planning the family vacation. They’ll point out who in their brood likes to do the beach and who likes to ski: they know who wants peace and quiet and who likes a lively crowd; and the breadwinners among them can distinguish who likes to spend the saving account and who likes to plan for something more cost-effective. The successful parent will quietly avow – not aloud, but to oneself – that they are the World Heavyweight (or Lightweight, depending on whether they’re trying to bulk up or slim down) Champion of family vacation planning, as they somehow managed to take the variances of the masses and funnel them into one outstanding trip.

Then there’s me and my planning of the family vacation. One daughter wants to do Disney, the other wants to ski, my wife wants to go lounge on a beach south of the border, and I want to go hiking and shoot guns. The sum of all parts does not a whole make

Usually, we’ll be quite democratic and politely debate where we want to go. That will go on for a good seven minutes and then I’ll become authoritarian and make an executive decision because, well, because when it comes down to it, whoever does the planning – no small feat, any parent will tell you – should be the one to call the shots. That shot caller is me, or at least in print that shot caller is me because I’d never avow it, not quietly or otherwise, in front of my Italian wife.

Still, as shooting goes, I decided to take my family to a place I’d been twice before, though one that they’ve never visited: Big Cedar Lodge in Ridgedale, Missouri, just a spit from Branson. The reason is that even though Big Cedar has neither white sand beach nor snowy slope, I knew that if I planned it right, a couple of days and nights in the shadow of the Ozark Mountains would get my girls to want to vacation my way. My way has a mission statement, which is this: You’ll have more fun in two days in Southwest Missouri than you’ve had during past vacations in Southwest Mexico or Southern California.

For starters, as I’ve been telling people in travel circles over the years, Big Cedar Lodge is like a Bass Pro Shop with beds. Johnny Morris, the owner of both and a living legend in the state of Missouri, fashioned his shops and his resort with one goal top of mind: Get people outside.

I’d been to Big Cedar Lodge in the past with my dad to watch the Bass Pro Shops Legends of Golf tournament at the Top of the Rock course, and another time with my buddies on a fishing trip. Each time, I remember wishing I had my girls out there in the rugged wilds of the Show Me State. I knew they would enjoy the various restaurants, the free putt-putt golf course, the kids fishing hole, the Ozarks natural history museum and the cave tour. Yet there was one activity onsite that I wanted them to partake in more than any other.

The Bass Pro Shops Shooting Academy and the gun-firing that goes on there is more foreign to my girls than jet skiing in Puerto Vallarta or snow skiing in Switzerland. To me, that’s a sad commentary and one that makes me a rank amateur in the vacation-planning sport.

I needed to change that.

I’ve been shooting for years and after 15 years of marriage, I finally got my wife into it. My daughters, however, had no desire to learn to shoot. Parents who have tried to force their kids to do something they like but that the kids don’t will fail almost every time. But the savvy parent loves their daughters just enough to trick them into thinking something they don’t want to do is actually their idea in the first place. That parent is the World Heavyweight [or Lightweight] Champion of Parenting. And I wanted a belt.

When we left our cabin and got in the car for the short drive over to the Shooting Academy, I told the girls they were in for a big surprise, one that they’ve never done before, and that they’ll never forget. That piqued their interest just enough. When they met shooting instructor David Storch, who emerged from the gun vault holding a freshly-oiled 20-gauge shotgun for my wife and 12-year-old daughter, a BB gun for my 9-year-old and a 12-guage for Daddy, and once they were informed they’d get a chance to wear yellow sunglasses, don big-ol’ earmuffs and shoot clay pigeons, they immediately perked up. My daughters started doing the equivalent of an Ozark Mountain Happy Dance, which means they started talking a mile a minute and asked Storch a range of questions like: “what’s your favorite gun?”; “have you ever missed a shot?”; and “who’s better at shooting, you or that guy? [younger daughter says loudly and points to the cashier].” 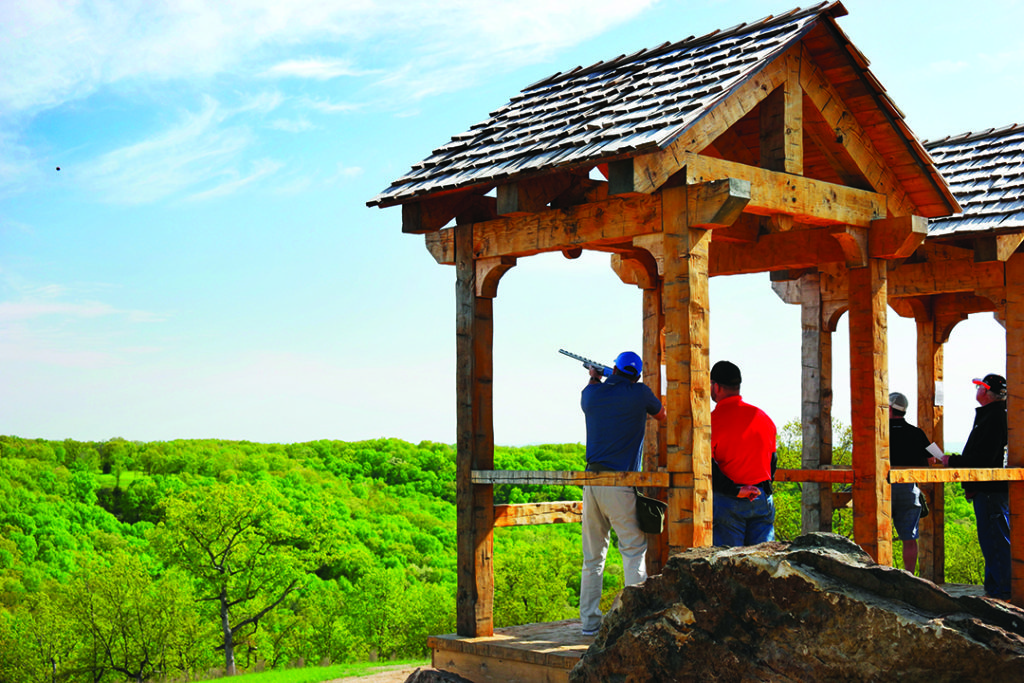 After 50 moving clays and hundreds of BB’s shot at stationary clays, my girls were hooked. They talked about the shooting trip for a fairly good portion of the six-hour-drive back to Dallas. And they asked the magic question – the one that’s a telltale sign of a vacation well planned and a job well done: “When are we going to go back?”

Parents who have done the parenting thing long enough will tell you that by and by, they get pretty good at planning a family vacation. I’d gotten good at getting my girls to think that they are vacationing where they want to vacation. That was until Big Cedar Lodge, the Bass Pro Shops Shooting Academy and the striking Ozark Mountains worked their magic on my family and turned a reluctant tribe into genuine outdoorspeople. And that makes me the World Heavyweight [though I’m slimming down] Champion of Parenting for this vacation.