The instructions coming over the radio seemed counterintuitive as we went into a turn. A sense of losing control came over me but in my head, I repeated the mantra I had learned earlier in the morning: “When in doubt, throttle out.”
With a blip on the skinny pedal, a dab of brakes and copious amounts of count- er-steer, the 550-horsepower trophy-spec desert racer kept its composure as we slid through the turn and into the next.
“Good job, now line up for the next.”
The Jedi-like instructions coming from my passenger, professional driver and co-own- er of Driven Dynamic Jeff Humberson, kept us upright and out of the bushes on this dusty, twisty track. As I speed from one turn to the next, I harken back to the days of reckless driving down dirt roads in my younger years. Hop- ing to be living a life like rally-racer Ken Block or Baja-racer B.J. Baldwin, I was finally living out my childhood dream of off-road racing.
Roughly 200 miles west of San Antonio, just outside the small town of Eldorado, Texas, is the main headquarters of the AC Ranch. This section, along with three other adjacent plots of land, add up to 20,000 acres of prime hunting grounds on the western edge of the Hill Country. With over 20 species of exotic and native game on property (and a mix of high and low fences), this is an otherworldly landscape not found anywhere else in the lower 48.
The AC Ranch elevates the experience above any other ranches in the Lone Star State on several levels. Luxurious accommo- dations, gourmet meals and an on-site gun shop are just a sample of what makes the ranch special. You can even book time to re a wide selection of fully automatic weapons.
But the pièce de résistance is what Driven Dynamic has set up on AC 2, one of the satel- lite properties. Humberson and his business partner, Alex Nicholas, run a driving school where one can spend a full day behind the wheel of a trophy truck on the two-and-a- half-mile course, meticulously crafted and strategically planned by Humberson. “It offers a little bit of everything,” Humberson explains. “The course is also designed to be bi-directional.”
No matter how much experience one claims to have, Humberson makes everyone have a chalk-talk before suiting up. Studying a map of the track and learning terms like “unloaded wheel spin” and “throttle steering” will certainly come in handy. These terms are not the part of the average hard-core driver’s lexicon, but then again, Humberson is not your average hard-core driver.
In a previous life, Humberson was a creative director at the Discovery Channel, but had always been involved in racing in one form or another. “I’ve been racing some sort of motorsports for 36 years,” he says. “Sports cars for 10 and off-road racing for seven.” Before cars, Humberson raced three- and four-wheelers, motocross and snowmobiles.
His racing career is highlighted with big name events such as the Mint 400 and the ultimate in North America, the Baja races. “The Baja 1000 to me is like climbing Everest,” he says of the annual grueling races that take place on the Baja peninsula in Mexico. When he isn’t teaching ranch guests how to drive, Humberson partners with Ford Motor Company, instructing engineers and suppliers in limit and sub-limit driver train- ing. This includes courses that are both on and off-road, as well as trailer towing. 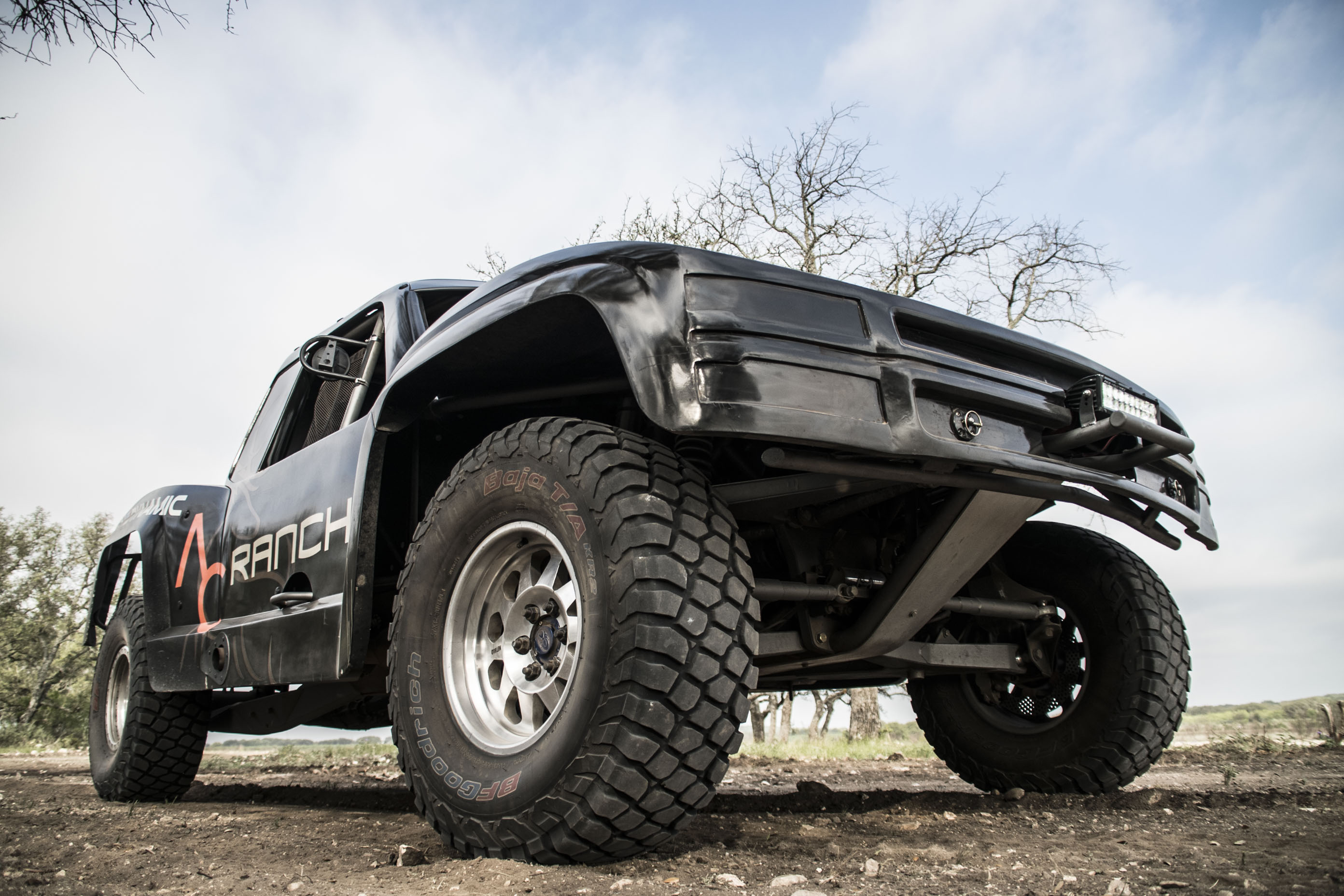 Lap after lap, I become more comfort- able with the monstrously wide truck. Before I know it, we are catching air over bumps and drifting sideways through Charlie, a long sweeping U-turn named for the ranch owner. “Let’s make this sexy,” Humberson says over the radio as we slide around Charlie.
When the dust finally settles and I finish my final lap, it is time for the master to show the student what this new skill set I learned can do. Humberson and I switch seats and set off down the dirt track. Before I know it, we are sliding sideways at breakneck speeds and flying through the air over bumps. 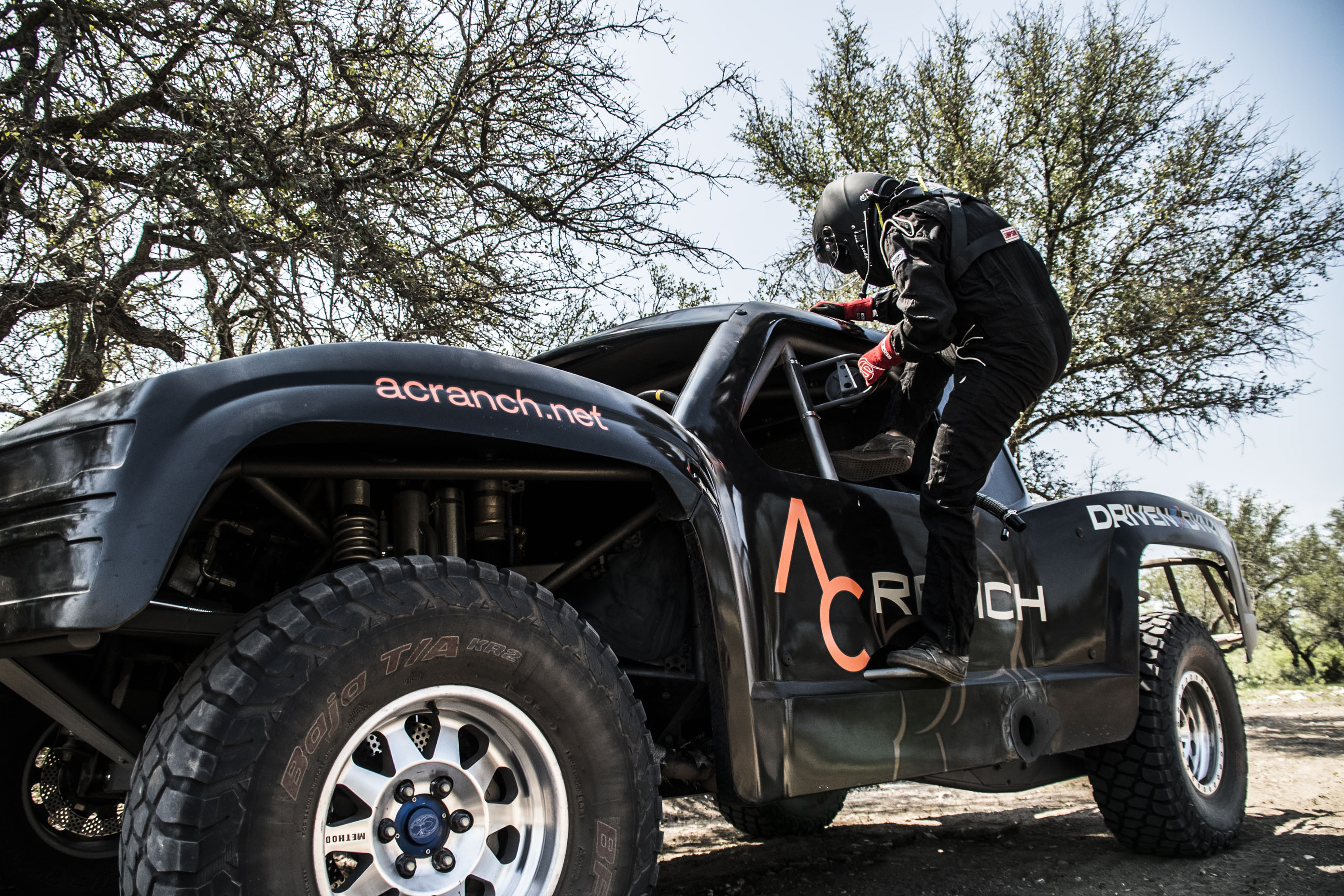 His every move, while seemingly chaotic before, now has surgical precision. As I watch him tear through the dirt course, I remember something he said earlier in the day. Humberson explained that every skill taught on this track has practical applications in everyday driving. Most important, knowing to see beyond what is directly in front of you and anticipating your moves are increasingly important skills on Texas roads, given the population spike in almost every major and mid-major city.
“Don’t look at what you don’t want to hit,” he says.
Humberson and Driven Dynamic have created a one-of-a-kind experience at the AC Ranch. With the infux of Baja-style vehicles like the Ford Raptor on the roads, the off-road racing world seems to be growing. It is only a matter of time before people are lining up at the ranch for a chance to drive like the pros. Contact AC Ranch for pricing. acranch.net