Whenever possible, Jessica and Jep Robertson like to be with their family in the kitchen of their Austin home.
“Food and family are two of the most important things in our lives besides our faith,” Jessica says. “We want to teach our kids how to serve others, and good food is such a centerpiece for that.”
It can get a bit crowded with five kids, but for them, food and family have always gone hand-in-hand.
“Growing up, our family philosophy was, ‘We might not have much money, but we’re gonna eat good,’” Jep says. “That was a tradition instilled by my grandparents, which was passed down from their grandparents.”
Jessica grew up with a similar appreciation. “Every Sunday, we’d go to my grandmothers and have a huge breakfast before church,” she recalls. “Coming into the Robertson family, it was just so much like my family growing up.”
For the extended Robertson family back in Louisiana, hunting and holidays fuse into one long season that basically starts late in November and finishes up around the end of December. It’s kicked off with a huge meal the day before Thanksgiving, where family members and friends gather for a feast. The turnout for Robertson family events is usually pretty high – Jep’s first cousin, Jon Gimber, says that growing up, “We could play full games of football with substitutions.”
Typically, for the gathering that Wednesday before Thanksgiving, about 50-to-60 people show up. This means meal prep usually starts that morning with Jon deep-frying turkeys, and usually not just for that night’s meal.
“Folks will come up and ask, ‘Since you’re frying turkeys, do you mind frying me up one for tomorrow?’” Jon asks.
That comes as no surprise to Jep, who says no one fries a better turkey than his cousin.
“If you’re smart, you stand around Jon when he’s carving it up,” Jep explains. “If you snack on some crackling turkey skin, you’ll usually get a little full just from that.”
Snacking is a smart move—it’s best to sneak a bite of a favorite dish before it’s time to eat because it might be gone before you can get a helping. “By the time we get to the official meal, we’ve normally dusted off one of Kay’s homemade sweet potato pies,” Jon laughs.
More people arrive throughout the day, each bringing their contribution to the meal. Everyone makes whatever they feel comfortable making – “We don’t want anyone getting over their skis,” Jon explains. By the time everyone sits down to eat, there are four or five deep-fried turkeys, 10 or 12 pies, and a slew of sides to go around. 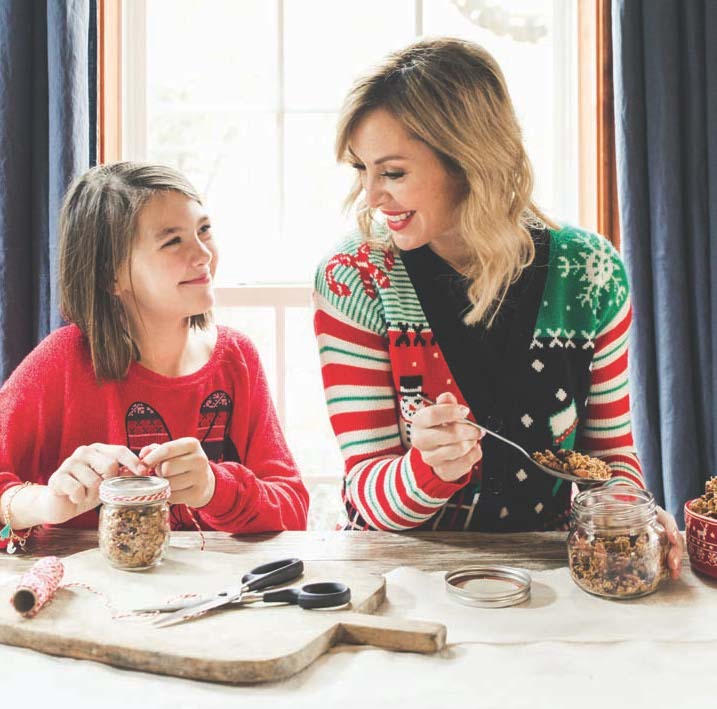 The first time Jep brought Jessica to the table, she had a look on her face that said, “Good grief, how are we gonna eat all this?” he recalls. “Sure enough, by the end of the night, it was all gone.”
However, this past November, Jessica and Jep didn’t make it back to the bayou.
“Last year’s Thanksgiving feast was the first I’ve probably missed since I’ve been alive,” Jep says.
When Jessica and Jep moved to Austin in 2017 to open their food truck, Jep’s Southern Roots, it meant that there would be some changes.
Since they couldn’t be in Louisiana for the annual November feast, Jessica’s family came down to Austin for the holiday, but about a week before that, Jep and Jessica had their own celebration. They invited five other couples over for their first “Friendsgiving.” Jep prepared a sous vide turkey—cooked 18 hours for maximum moistness—and Jessica baked a delicious banana liqueur cake.
“It was a lot of fun,” Jessica says. “We’re hoping to make it a tradition.”
The two also teamed up with four other couple to form a “supper club,” where each month one couple is responsible for cooking the entire meal—appetizers to desserts—for the rest of the club. They’re all foodies, and so it’s a chance for everyone to showcase their specialties.
Jessica said the idea behind supper club is a simple one: “We’re all so busy, and relationships take effort and work. So, we said, ‘Let’s sign a contract [not an actual contract] to get together once a month for one year.’”
So far, the supper club has met twice, and the results have been impressive. Last month’s menu was Italian, complete with homemade pasta, lasagna noodles infused with fresh basil, acorn squash, and homemade sourdough bread. Jessica and Jep are up next, and they are excited to finalize their meal plan.
“I’m going full country,” Jep exclaimed. This likely means breaking out his tried and true chicken pot pie recipe with lots of sides, including collard greens and his wife’s deviled eggs. For dessert, Jessica is thinking about making apple turnovers from scratch with homemade ice cream.
Despite the amount of preparation that goes into such a meal, Jessica said it’s really not stressful. “Honestly, I get excited about it,” she says. “I would sign up to host every one of them if I could.”
Jep admits that they’ll miss the holidays, such as Labor Day cookouts and birthday get-togethers at Willie’s. “But we’ll be starting our own traditions too,” he says. “We’ll just do them in Texas.”