Jade Struck is a badass girl with a gun (and a purple belt in karate). But she’s also smart, sensitive, and full of faith.

Jade Struck is, well, striking. Her jet-black hair and piercing eyes make her stand out from the standard California crowd, but make no mistake about it, she’s a California girl through and through. Since she was 18, she’s been a firearms instructor with Taran Tactical Innovations, training civilians and celebrities on shooting like a pro. She’s also a professional competitive shooter with an eye toward the big screen.

Q: Your name is so cool. What’s the story behind it?

A: My dad was in charge of naming me, and he just liked the name Jade. Jade Victoria Struck is my full name. People think it’s a stage name, but Struck is my real name. When I was a kid, I wasn’t sure about my name. But as I got older, I realized I have a bitchin’ name.

Q: When and how did you get in to shooting? And when did it go from being a hobby to a profession?

A: I started shooting when I was 8 with my dad, who’s a retired police officer. I grew up on a ranch in Simi [California] doing crazy country stuff. My dad was a single dad who raised me and my sisters up like little boys. I grew up hunting too. I took shooting seriously my whole life—I really enjoyed the structure of it. When I was 16, my dad took me to a shooting match to watch a friend of his [Taran Butler], and I was blown away. I was playing video games at the time, and it was like real-life Halo. I thought, ‘What the hell is that?!’ Then when I was 18 years old, I went to work for Taran. He called my dad and asked if I needed a job.

Q: Speaking of Taran Tactical, what’s your role there?

A: I’m a firearms instructor. I teach five days a week for private clients. I’m also Taran’s right-hand man—I’m the scheduler and planner. I dabble in all areas of the company from customer service to teaching to filming content for social media. I have a real passion for teaching. Shooting helped me to find who I am, and I love to share that.

Q: Taran Tactical trains actors for movies (like the John Wick series). Do you have any favorite celeb stories?

A: I worked with Halle Berry [for her role as Sofia in John Wick 3: Parabellum]. My ultimate goal is to be an actress, and I studied her role in Monster’s Ball in my acting class. She is so sweet and kind and just authentically herself. I trained her for eight weeks. The director came to me and told me, ‘I want her to be better than you.’ I knew that it would take one hell of a student, but Halle just exuded the drive to be the best. To see her growth over the course of our work was fun to watch. Working with Halle was everything. 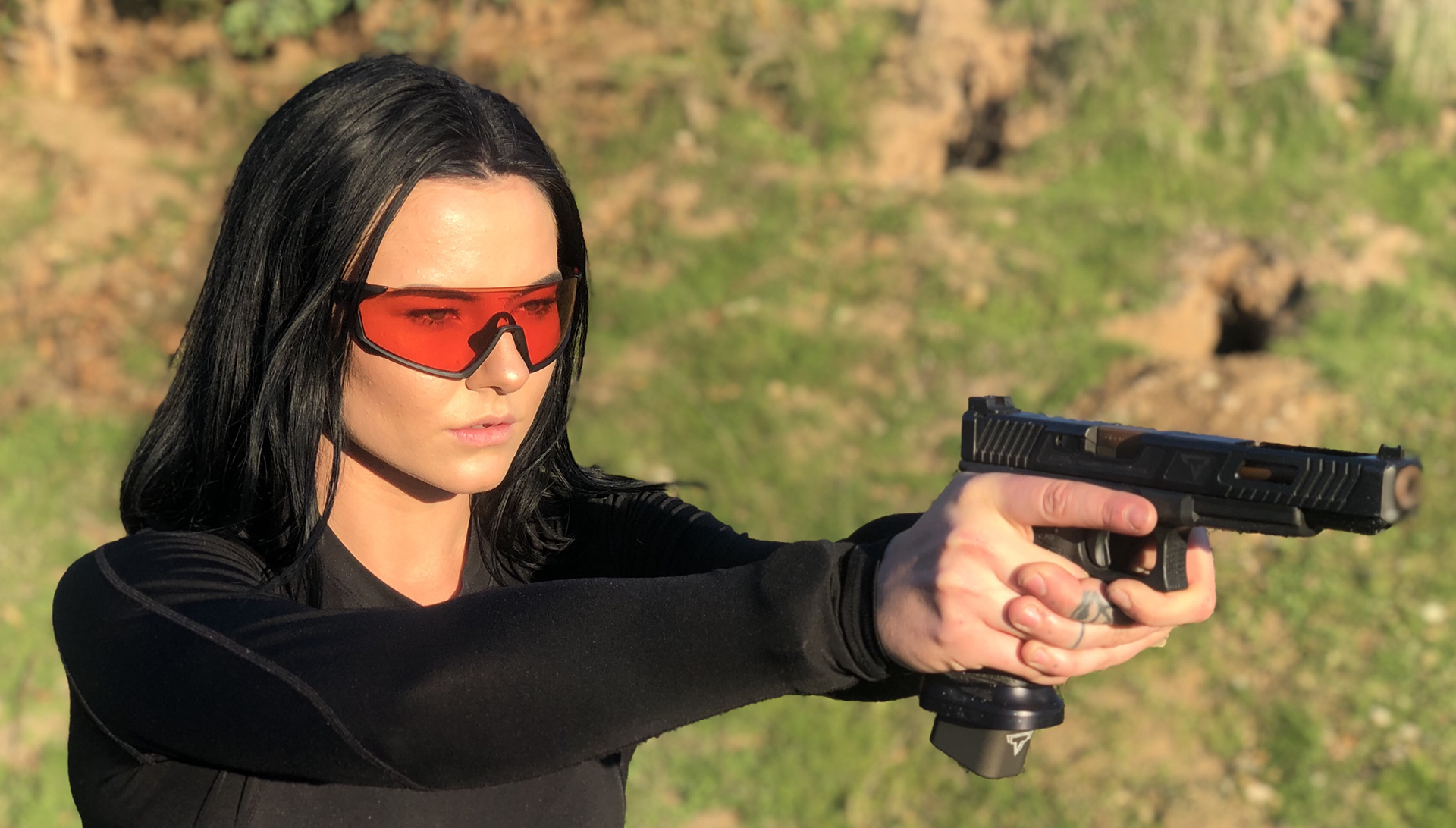 Q: You’re a competitive shooter, but there’s more to it than just firing guns. Tell me about your fitness routine.

A: When I started shooting, I was 110 pounds and 5’6”, straight up starving myself because I had image issues. When I first started working for Taran, I could barely pick up a gun. I realized if I was going to do this, I had to change everything. I got a gym membership and started off light. Now I do high-intensity interval training. I want to be at peak performance all the time. I train every day, sometimes twice a day. I have the mentality of pushing myself harder all the time.

Q: How often do you compete in shooting competitions?

A: First, I love competitive shooting. I love the game! I go to four or five majors a year. I competed in a match after being on a 10-day hunting trip and won my division and the overall match. I’m still hard on myself, but sometimes I have to rest up and have trust.

Q: What’s your favorite firearm and why?

A: I like my TR-1 Ultimate rifle that Taran built. It has all the bells and whistles, but it’s super lightweight. I love shooting a rifle, and it’s a beautiful piece of equipment. I also like my TTI 2011 Combat Master pistol. It’s smaller so you can move with it. I’ve never shot a smoother gun. It’s like the gun picked me.

Q: You are also into martial arts—what do you practice, and what’s your best move?

A: I dabbled in stunt work, and stunts are a mosh pit of karate, kick boxing, jujitsu, and boxing. I mainly study karate and Muay Thai. I love the formalness and tradition of karate. I like that in karate, you have to value yourself and what makes you unique.   I have a purple belt. My dad was a boxer and is a third degree black belt, so it’s in the blood. My signature move is a Mawashi geri [a high spinning kick]. I love to do it.

Q: You’re a badass girl with a gun. Is that intimidating to guys?

A: It definitely depends on the guy. But if a guy is intimidated, we’re not dating. I need someone who has a lot of confidence and who’s proud of what I’m doing. I’m about my work, and I never let my relationships affect my work.

Q: What do you do when you’re not working?

A: I don’t think I really slow down. I love animals. If I do have downtime, I’m outside. I like to be out in nature, listening to music. I enjoy hiking. I wear a weighted vest and hike about seven miles on hills. I like to ride my horses, and I write songs all the time. Music is so profound; I’ve always loved it. Part of me is an artist, and I just love to be creative. I wake up every morning and read the Bible. The one thing I’m doing for myself lately is Bible study and going to church on Sunday. I try to spend time with people who I admire and love. 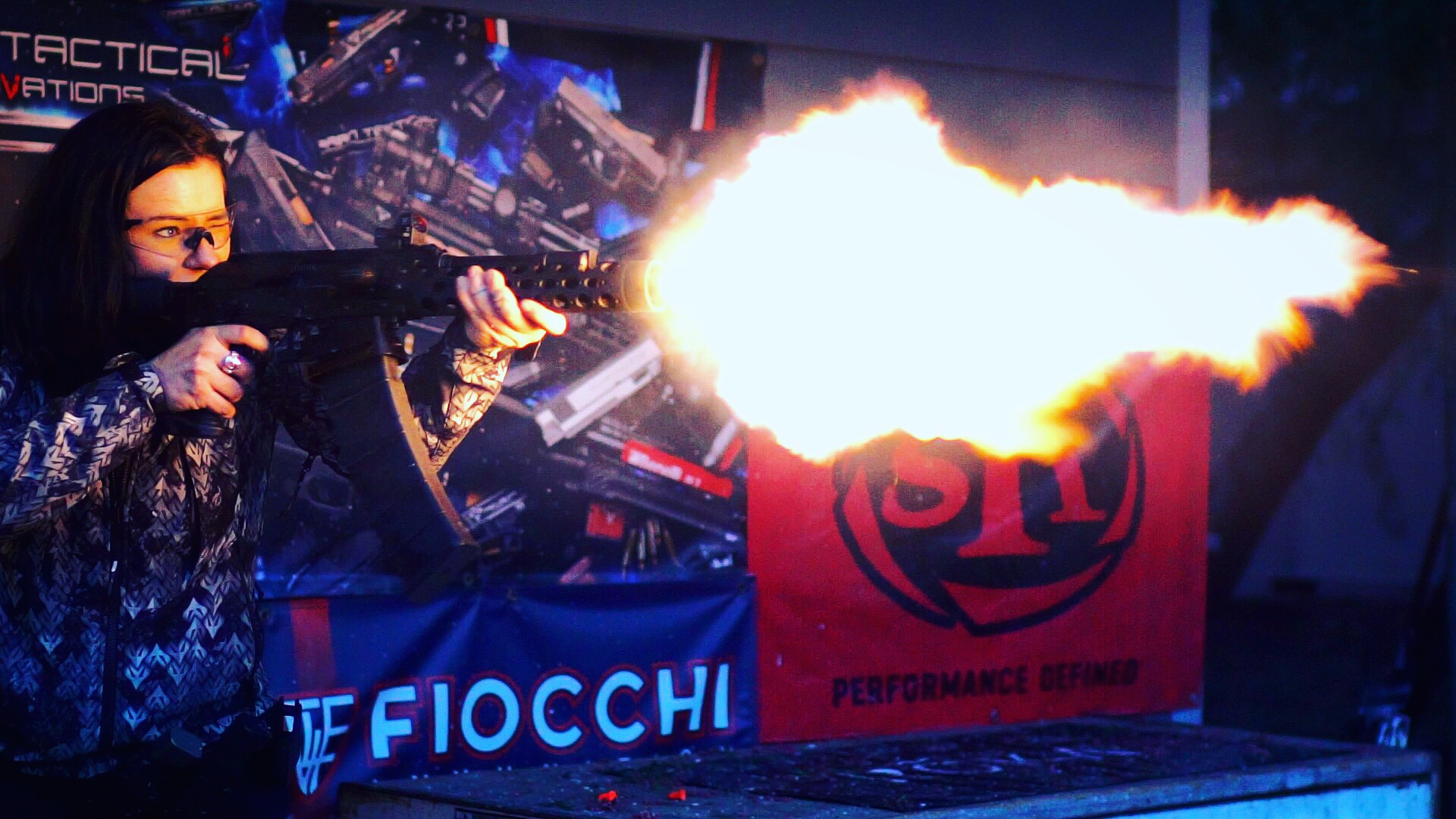 Q: If you could pick any action hero to take over the role, what would it be and why?

A: I’ve got this character inside of me I call Victoria Viper. She’s an antihero. She’s fighting for something. She wants to help people by getting rid of all the jerks. She’s kind of a mixture of Batman and The Punisher all rolled together.

Q: How can you encourage women to try shooting?

A: Get a Glock, something you can work with, get some basic instruction, and then go for it. Get out and do it! Invest the time to learn.

Q: How do you use social media in your life?

A: I enjoy social media. I like to have the creative control to put out the content that I like. The bad side of social media is not having the time to do it like I want to. It’s a balancing act. I would rather post sometimes and the posts be great than post every day and they be worthless. I enjoy the ability to have a voice. I will always do my own social media because I don’t want anyone else to speak for me.