When it comes to his career choices, there’s probably not much BJ Baldwin would do differently.
Well, maybe that nickname, Ballistic. The champion off-road racer came up with it himself on a whim years ago as kind of a dig against a friend and competitor who called himself The Flyin’ Hawaiian. “It means nothing,” he says. “It had a B in front, that’s all. If I had to do it over again I would just be known as BJ Baldwin. I don’t really care for the Ballistic thing. It’s a little bit too superhero-ish.”
So while millions around the world may think of Baldwin as some bold and badass daredevil who won’t let anything get in the way of his monstrously rugged Trophy Truck or his king-sized ambition, he says the reality is quite different. Not to say he’s Clark Kent in real life, but he speaks in a mild-mannered and sensible tone as he describes a more sedate life outside the rough-and-tumble world of desert racing. He enjoys spending time with his girlfriend and his two young children and riding trails in his UTV or taking his Porsche 911 on fast cruises around the mountain roads outside his hometown of Las Vegas. In his constant quest for better physical fitness, BJ has a passion for eating healthy foods (his favorites are sushi, sukiyaki, and Korean barbecue) and stays active with martial arts and boxing. He also trains with his cherished firearms employing a calculated discipline. 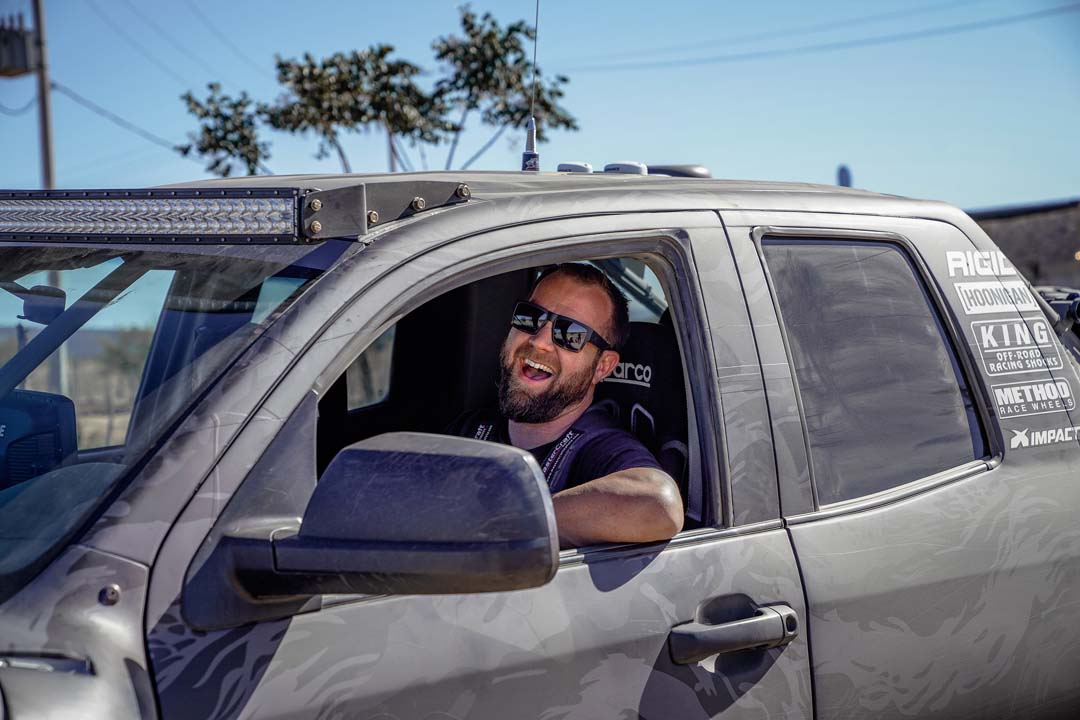 And though he is often described as “fearless,” BJ shakes off that description, too: “I am absolutely not fearless. I know what it’s like to crash, and I hate the sound of twisting metal.” He’s been inside a truck while it was on fire and once slammed head-on into a huge boulder at 75 mph. That one left him punch-drunk with an injured back and ribs, but for the most part he’s managed to avoid serious injury or calamity.

“I’m a master at catastrophe management.”

“In 22 years of racing, I’ve really had only four crashes,” says Baldwin, who turns 40 this September. “I have been very good at being able to save the truck when stuff doesn’t go as planned. I’m a master at catastrophe management.”
The seven-time off-road racing champion was the back-to-back winner of the torturous Baja 1000 race in 2012 and 2013, and he did it without relief from a co-driver. While most other Trophy Truck racers share the wheel with backup drivers, Baldwin is what is known as an “Ironman” because he drives solo for the entire 20-hour duration. (The designation is in reference to legendary driver Ivan “Ironman” Stewart, who was a dominant figure in the sport from the early seventies to the late nineties.)
The Baja 1000 races—which range from around 850 miles to as long as 1,100 miles, depending on the exact course—take place each November along the Baja Peninsula in northwestern Mexico and are considered to be among the most grueling races in the world. The scenic but challenging route offers stunning oceanfront views in places, but it’s also uneven, silty and sandy, and often strewn with rocks. Clouds of desert dust can obscure a driver’s vision day and night. Often there are stalled vehicles to avoid, and mischievous locals have been to known to plant booby traps.
The wild and dicey Baja races are open to all kinds of competitors, including motorcycles, ATVs, UTVs, Volkswagen Beetles, and dune buggies. While Baldwin is at the top of the food chain, so to speak, in his 850-horsepower custom-built truck, he started out smaller, too, in a second-hand buggy when he was still a teen-ager. He partnered with his father, Bobby Baldwin, a professional poker player who became a casino executive, and they funded the operation themselves at first. It’s enormously expensive, so nowadays there are corporate sponsors like Monster Energy, Toyota, Toyo Tires, Rigid Industries, King Shocks, Polaris, and Hoonigan Media Company to help keep the wheels turning. 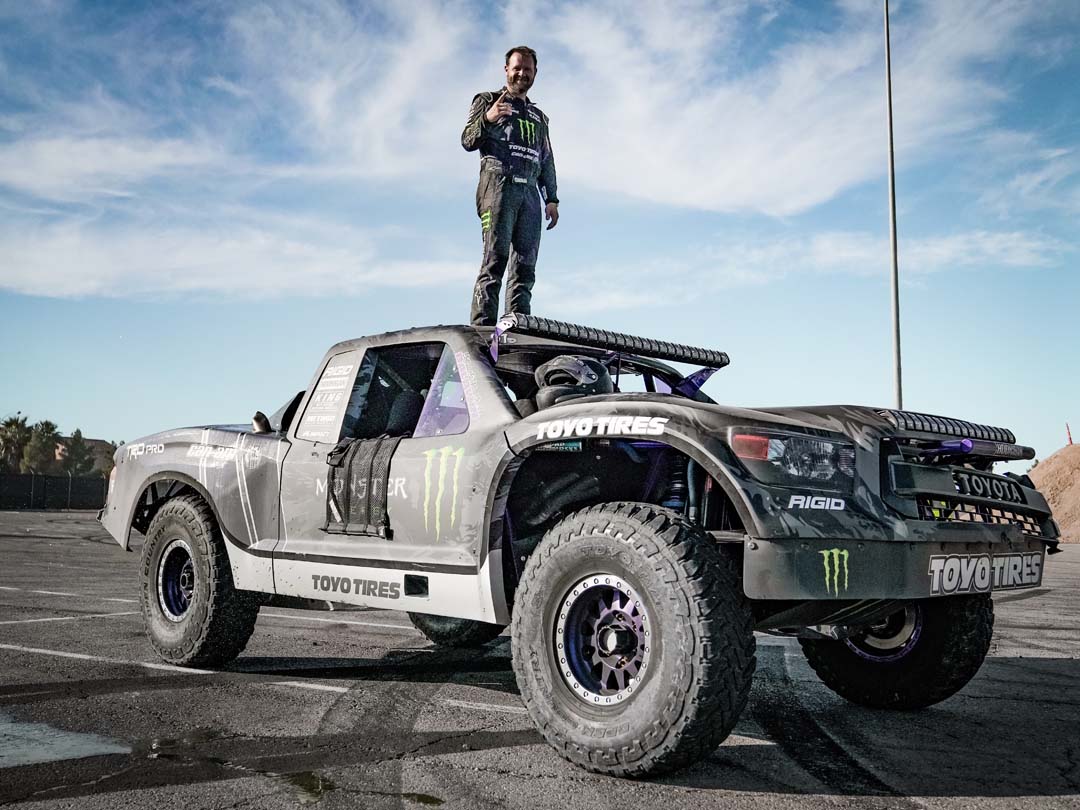 His company, Baldwin Motorsports, has four full-time employees. But on race day, the team grows to around 25. They follow along in five chase trucks and a helicopter and act as pit crews to make emergency repairs or change tires and quickly top off fuel tanks. Baldwin says it takes him a quarter of a million dollars to race the Baja 1000, and that’s not including the truck itself, which can cost up to $750,000 (and has to be virtually rebuilt after a race.) Though prize winnings are relatively meager, Baldwin says he has lucrative contract options with his sponsors that increase along with his success. “I’ve been fortunate that people think I’m interesting and want to see me race and don’t care whether I win or lose,” he says of his sponsors. “I also benefit them in terms of research and development, and I get to promote all of the products—if I win the Baja 1000, three or four million people know about it.”
While spectators line up faithfully along the Baja course, millions more follow Baldwin’s career online. He has some 565,000 fans on Instagram, and his professionally shot and edited RECOIL series of short films on YouTube have been viewed nearly 60 million times.

But when he’s not working, he’s not looking for attention. He and his family generally like to avoid crowds, though he admits he is recognized in public pretty much every day. He unwinds in his Polaris RZR UTV on trails near his home or hops behind the wheel of his TRD Pro Series Toyota Tundra pickup or his Porsche 911 Turbo S, which he says goes zero to 60 in two and a half seconds and reaches speeds over 200 mph.
A big proponent of concealed-carry laws, Baldwin says he is almost always armed, usually with his favored Glock nine-millimeter pistol. “With me, if you see me with my pants on, there is a 100 percent chance I have my gun on me,” he says. He does “dry-fire training” every night, he says, and has a total of around 100 firearms in a “war room” in his house. While he enjoys firing AR-15s and larger weapons, the ultimate goal is defense. “I’ve had a concealed-carry permit for 18 years,” he says. “As part of my journey through life I’ve tried to improve myself in a defensive fashion with intelligence and training to become the most dangerous person I can.”
He also trains and spars regularly with boxing trainers and jiu-jitsu instructors. He says his interest in fitness and a healthy diet evolved along with his own maturity. “Between the ages of 18 and 24, I went out and partied all the time. I started getting athletic, and lost 65 pounds in six months. Now, I’m (almost) 40, and I am probably five times stronger than I was when I was 20.”
“It’s necessary,” he says of his physical regimen. “You don’t see too many out-of-shape champions unless they’re bowlers.”