Bob Bisbee’s future was changed in the spring of 1981 when his friend, Luis Coppola, and Luis’ nephew, Bill Baffert, visited his Newport Beach Fuel and Tackle Shop.

They were there to purchase fishing tackle for their Tortuga Fleet in Cabo, a remote fishing village on the tip of Baja. They talked about the astonishing fishing and described the Calcutta format, which had become popular with golf tournaments … and that it might adapt well to sportfishing.

After a year of planning, Bisbee led a small fleet of sport fishers over a thousand miles south from Newport Beach to his First Annual Big Fish Tournament and Calcutta. The informal Guys Gone Fishing event in the prolific waters surrounding Baja’s tip was an instant success. Participants were dazzled by the sensational billfish fishing compared to what they were accustomed to in Southern California, and the Calcutta was the icing on the cake. Over the next nine years, the event gained in popularity, so much so, that in 1990, Clicerio Mercado was brought on board to serve as the local representative and coordinator.

Bisbee continued to oversee the event as it grew larger each year. By 1995, Bob Bisbee turned the day-to-day operations over to the second Bisbee generation, his son Wayne, from Plano, Texas. Three years later, his daughter Tricia from Costa Mesa, came on board to handle sponsorships. They joined the event just in time; it’s been a full-time job for both of them ever since.

“It was a family thing, but it was getting so damn big, we needed to get out of the family mode and get into a business model, and I didn’t want to do that,” the elder Bisbee said at the time. 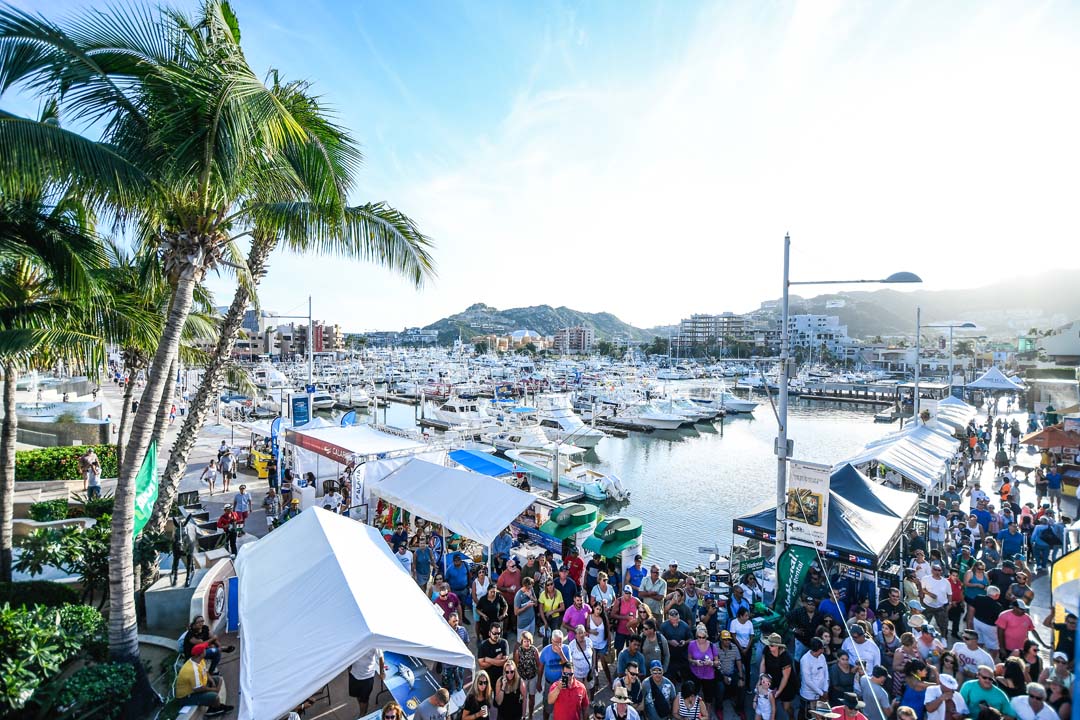 In 2000, the Bisbee team expanded to the east side of the Baja California Sur peninsula, establishing the East Cape Offshore Tournament in Buena Vista. That tournament not only included marlin, but also dorado and tuna. It became so popular that the Los Cabos Offshore Tournament in Cabo San Lucas was established with the same format in 2002.

The small village of Cabo San Lucas originally boasted a population of 300, plus a cannery, in the mid-1950s, but over the years it became the municipality of Los Cabos and by 2015, the Cabo San Lucas population had grown to over 81,000 with an inner harbor, marina, and an expanded Los Cabos International Airport.

The tournament is hosted in the IGY Cabo San Lucas Marina along with several smaller marinas in the small bay. The IGY Cabo San Lucas Marina is considered a world-class destination—one of the most beautiful and most significant to be found anywhere. Boats here range from pangas to 400-foot mega yachts and every length in between. Boats are available for charters of all sizes including harbor cruises, whale watching, fishing, or simply cruising. The fishing is fantastic, diverse and prolific, and unlike anywhere else, making Los Cabos the Marlin Capital of the World.

The marina, surrounded by the malecón or boardwalk, is home to at least three luxury hotels (Breathless, Tesoro, and Marina Fiesta), along with numerous eateries. Visitors can find an array of cuisines to suit every palate—from street tacos to fancy French menus, Italian, Mexican, seafood, a Ruth’s Chris Steak House, sports bars, cafés, and of course a Starbucks.

As for sounds, there’s music across the spectrum from small, intimate jazz to rock ‘n roll, playing from mall speakers and open bars, where cheerful bartenders entertain customers making frothy, salt-rimmed margaritas or “fruity” daiquiris, all while ensuring a steady supply of tall cold cervezas for the hot, thirsty shoppers, sightseers, and anglers. 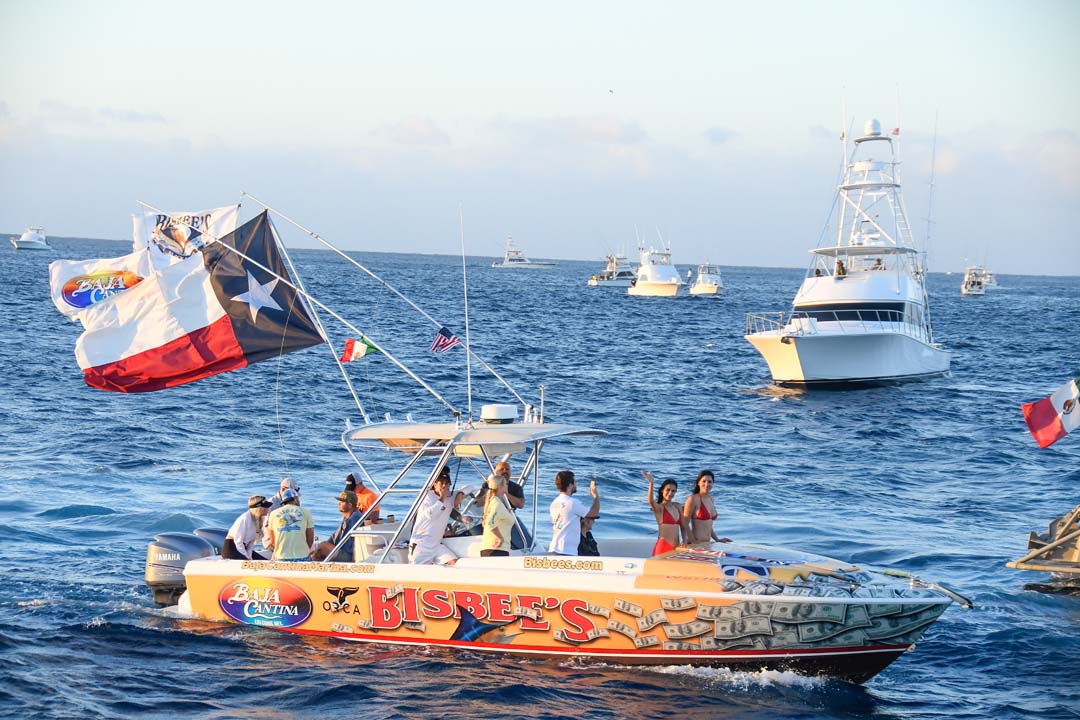 The 27-year-old Baja Cantina is a favorite haunt of anglers. Overlooking the Cabo San Lucas Marina and its luxurious yachts, the cantina is home to the Bisbee Tournament crew and staff who can be found having breakfast there after the electrifying flare gun start each day. In the evening, after a long day of fishing, the same group can be seen kicking back and catching up with the boat owners and crews.

The Bisbee family and staff have continued to tweak their tournaments and the entertainment they provide. In 2006, Bob’s nephew, Carey, took on the responsibility of entertaining the king-size crowd gathered to witness the spectacle in between the actual weigh-ins. He and his team began flinging swag from the top of the scales to the spectators crowding the weigh-station below, often wearing a bizarre collection of hats and doing whatever it takes to make sure the crowd has a good time. Another exciting addition in 2009 was CatchStat, a scoring solution that allowed everyone to follow the tournament live on the internet and smart-phones.

Three generations of the Bisbee family have been involved in the “Bisbee Tournaments.” Bob, Sr., patriarch of the Bisbee’s Black & Blue Tournaments phenomena, passed away June 14, 2018, in the north Dallas Metroplex, leaving behind a legacy, a loving family, and a vast circle of friends and acquaintances.

“He will forever be united with the land that he loved.”

As friends and family watched aboard 25 sport fishers, Bob’s wife Aina and son Bobby Bisbee spread Bob’s ashes in the shadow of the Arches at Land’s End. Friends and family agreed, “He will forever be united with the land that he loved.”

The 2018 Los Cabos Offshore Championship, another of the Bisbee tournaments, reached a milestone, being the eighth tournament in the world to have a payout of over a million dollars at $1.165 million, which was distributed to eight teams. In 38 years, the three tournaments have paid out approximately $100,000,000. President Wayne Bisbee and Vice President Tricia Bisbee are at the helm as Tournament Directors overseeing entries, sponsorships, and anything else that is needed. Wayne’s son, Blake, daughter, Jordyn, and Tricia’s children, Paige and Jamie, are all involved, working whenever they are asked and wherever they are needed. Wayne and Tricia have carved out their niches while allowing other family members and staff to follow suit.

The Bisbee family shares a sense of humility wrapped in shock and awe at what they have accomplished. They refuse, however, to rest on their laurels, and they won’t let past successes dampen their enthusiasm to continue to fine-tune and improve the program. They seem to realize that little failures can become huge successes with constant tweaking and adjustments.

Along the way, they watched the small village of Cabo San Lucas grow as well. Today, Cabo is rated as one of Mexico’s top five tourist destinations, and together with San José del Cabo, is known as Los Cabos and boasts nearly 306,000 inhabitants.

“The Super Bowl of Fishing.”

The Bisbee family’s mega-business has exceeded everyone’s expectations. “This event means quite a bit not just to me, but anglers everywhere,” says Wayne Bisbee. Busy planning the 39th Annual Bisbee Tournament Series, the family has seen it evolve from a small marlin fishing tournament into what Sports Illustrated hailed as “The Super Bowl of Fishing.”

The Bisbees are proud of their contributions to both. Wayne Bisbee explained last year before the tournament, “If you think about it, these days, most things don’t last for 38 years. Especially something that started with six boats and a bunch of guys from Southern California coming down to Cabo to play.”

To learn more or to register, visit bisbees.com