To fully appreciate a foreign culture sometimes you’ve just got to jump right in it. Otherwise you risk missing the little nuances that make places and its people unique. No doubt I’d deprive myself of memories if I didn’t at least try to learn the language while abroad, just as I’d completely whiff on the flavor of a place if I never challenged my palate occasionally with delicacies I’d liken to bait back home. This was the Bourdain-esk attitude Editor-in-Chief John Radzwilla tried to instill in me as we landed in Mazatlan, Mexico. Ultimately I was there to fulfill a lifelong quest for a 10-pound largemouth, but we had a couple days in this hopping southwestern coastal town on the Sea of Cortez to reel in a few snapper, find a decent dinner, and tour its thriving beer industry before, um, fully immersing myself in the drink. Here’s how it all went down.

The streets surrounding our beachside hotel steered us toward cheap souvenir shops and Spring break tequila traps, but a deeper perusal revealed many cafés and street vendors where the spanish-language menus hinted their authentic food and prices. (We commonly ordered two cervezas each, chips and guac, and two shrimp taco plates for 275 pesos, or about $15 USD, and the locally owned-and-operated service was excellent.)

After lunch, we noticed an outdoor bar filling with ex-pat snowbirds, so we ducked in to gather on-the-ground intel. After draining a ‘rita apiece and winning the smiles of a dark-haired waitress with our friendliest Spanglish, we asked her recommendations on dinner, nightlife, and … beer.

Turns out, Mazatlan is home to the original Pacifico beer factory where it also brews Corona and Sol by the actual boatload. And what do you know? I like beer, and John likes beer, and we had a day to burn before going bass fishing, so the next morning we waited on the sidewalk with a class of high schoolers for the brew tour. After donning hardhats and safety glasses through which we imagined all the beer making processes that the company wouldn’t show us, we learned that Pacifico beer is much better than the Pacifico beer tour.

Here’s my quick traveler’s tip to Mazatlan: Skip the tour-de-cerveza and popular-but-seedy Joe’s Oyster bar—unless you’re really feeling loco—and instead take an Uber to El Presidio—now in my top five restaurants worldwide for ambiance alone. We dove directly into the culture with cocktails and appetizers, including a traditional mezcal with orange slices and crunchy fried chapulines (that’s crispy cooked crickets) and a platter of prosciutto sliced right off the leg in center courtyard. I had an amazing Shrimp Zarandeados (chipotle cream sauce) dish, and John had octopus; we ordered a bottle of Mexican wine and a bourbon capper–all for around $75 USD, a culinary experience that would’ve been $200-plus stateside. I’d return to Mazatlan for a night if only to take my sweetheart to El Presidio.

To read the full article you must be logged in.

The other draw in Mazatlan is, of course, the ocean and its offshore fishing. We called Mazatlan’s Harbor master, Geronimo Cevallos, before Ubering to the marina and catching a few red snapper in the late afternoon while sipping suds and admiring the view of Mazatlan between the volcano-like islands that guard it. The snapper we boated weren’t huge but well worth it for a half-day’s trip and a fitting warmup to the main reason why thousands of American sportsmen venture south of the border annually: the largemouth bass fishing.

If you’re reading this magazine, you’ve likely heard of Mexico’s famous lakes; El Salto, Guerrero, Comanchero, and others. All hold hefty Florida-strain bass thanks to a year-round growing season. Each lake is at a different stage of its life, so if your goal is a lunker of a lifetime or lake record, you’ve got to go where lunkers live. We chose a newly built reservoir called Picachos—pronounced Pe-Ka-Chos—an hour’s drive northeast of Mazatlan. Legendary U.S. fishing master Billy Chapman runs the outfit there called Anglers Inn (just a few miles away from his camp at El Salto).

While not yet known for giving up 10-plus-pounders, there have been a few caught at Picachos. Continually the average fish weight rises as the lake blossoms. Currently, you’ll likely catch 100 in a day, albeit many will be small unless you can find schools of older fish. It’s just a matter time until the lake’s six pounders graduate to the muy grandes that everyone’s after.

If you’ve never been fishing in Mexico, it’s a throwback to more romantic times when 5-stars were earned—not given—with excellent service, attention to detail, and tradecraft. Every time I’ve hunted or fished with a reputable outfitter in Mexico, I’ve marveled at the modest accommodations made luxurious by outstanding customer service. No doubt making a hundred bucks off tips from two days of unhanging lures, finding fish, and cracking fresh cervezas is much more than the average hombre makes in a month, so what results is a staff that takes tremendous pride in their jobs. Anglers Inn is dialed in.

For example, once you ask for coffee, your preference of how you take it is observed and recorded. The next morning your café is hand-delivered in bed exactly how you like it. And if you come back three years later, it’ll be delivered to you that way on the first morning. The homemade fare is superb for anywhere but amazing considering it’s coming from a remote fish camp in the hills. And sure there are flatscreen TVs with ESPN if you can’t miss the Masters, but I’d TEVO it, because what you really don’t want to miss is the fishing.

Picachos is known for its topwater bite and so at 6 a.m., even before the pinks and purps of a tequila sunrise illuminated Sonoran mountain peaks, John and I casted Pop-Rs at shadows and listened for strikes. It was unseasonably cool during late February—around 50 degrees in the mornings rising to the 80s by midday—and perhaps that had something to do with the slow action on the surface. 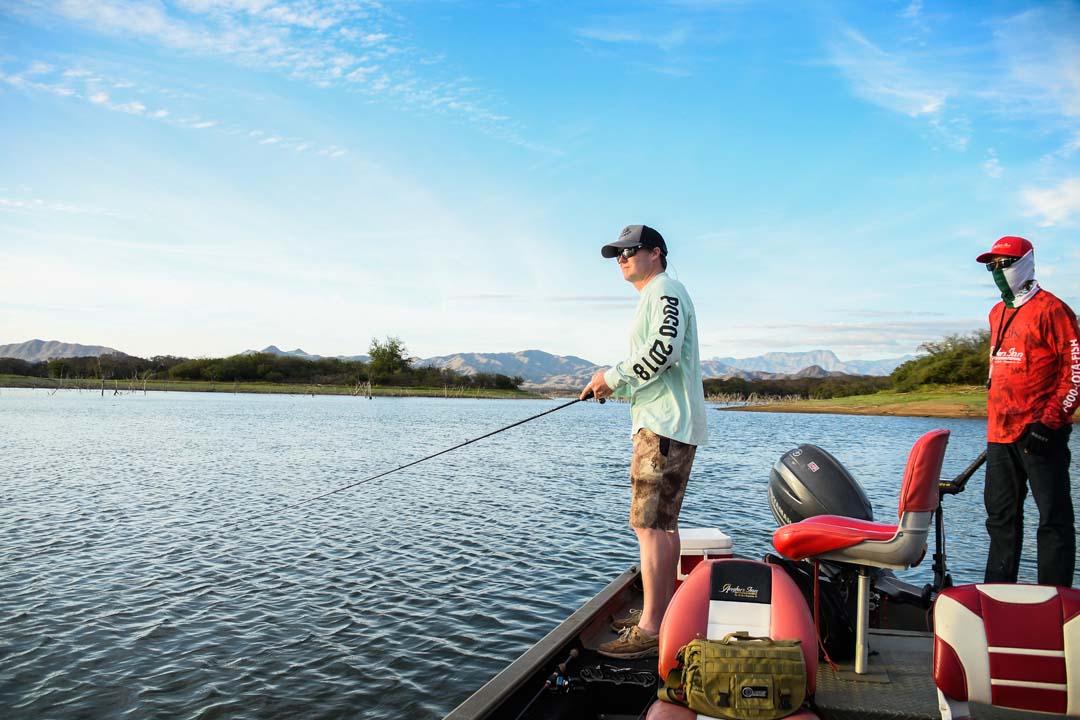 After an hour and a dozen bass, our mustachioed Mexican guide Fermin gave the call. “Sinko Sinko,” he dinned, and John and I both caught two-pound bass on our first retrieves with the 7-inch green plastic worms rigged Texas-style and fished in submerged timber where every cast looks as though you’ll have your arm broken by a bucketmouth. Muchos bass followed, albeit none muy grande. Our fish averaged only around 1.5 pounds, but we were encouraged when several campmates reported catching some over four and several in the 8-pound range. This clue told me several things: First, the quality of Picachos is where it should be, and second, either I’m a poor fisherman or I needed to, um, explore the water more thoroughly.

Later on Fermin motored us to a honey hole not far from camp. A few casts in, I felt the bump-bump of a bite and reared back ferociously, just as I’d done 100 times before. Yet when I did, my loaner rod slipped out of my hands and landed with a bloop in the green-clear drink. Without thinking of anything except the giant fish that was slipping away—along with my rod and my pride—I instinctively jumped into Lake Picachos, fully immersing myself in it as I grasped for the rod and performed a wild-eyed breast stroke back to the boat and clambered in. Despite Fermin and John being doubled over in hysterical laughter, I cranked in my slack and—dios mío!—the fish was still on! And if only for that, Mazatlan will forever be etched in my memory.

Postscript. How much did it weigh, you ask? Well, what’s important to remember here is the style in which the smallish bass was landed, not the sheer weight alone. And if you visit Picachos in the future, just ask about Señor “Phelps” and his lake record swim.” No doubt the fine staff took note, so they’ll have my towel and goggles ready for me next time without even having to ask.

For my sportsman’s dollars, the non-touristy parts of Mexico are the most underrated worldwide. Of course you must accept the poverty and roughness that comes with it, but the resourceful folks here have grande hearts. If you avoid the border towns, small-town and rural Mexico can’t be matched for customer service. Sure, the elephant in the room—the cartels—but odds-wise it’s similar to Beaumont, Baltimore, or anywhere else if you behave stupidly. Certainly, it pays to hire a proven outfitter because these experts thrive for a reason; they know how to navigate the laws and pitfalls to keep clients coming back. Don’t forget your passport, cash, and a smartphone for translating. The bottom line is, nowhere else can you catch buzzes on dollar margaritas and 10-pound bass on buzzbaits.

Email the lodge beforehand and ask specifically what lures to bring, and trust your guide when you get there. At Picachos, the bite was on 7-inch blue or green Sinkos and green lizards with a 5/0 worm hook and a 3/8-oz. sinker. Also Pack Pop-R’s and 8-inch green flukes rigged weedless to work shallow timber.

While most outfitters have rods and reels you can use, I spent the first morning fighting my loaner. In hindsight, I should’ve traveled with at least one reel spooled with fresh 20-pound flourocarbon. Clothes are washed every day, so you don’t need more than two sets. Pack a windbreaker, hat, and sunblock.