Midland – Ain’t No Reason to Stop

“Look at Mark right now!” the bassist for the breakout country music act Midland says, cutting himself off from the rant he was just on to draw attention to whatever it is that Midland lead singer Mark Wystrach is doing.

I have to remind Duddy that we’re conducting this interview over the phone.

“Well, he’s having a moment,” Duddy says, speaking on his cell from Washington Dulles International Airport during a layover that his band is making on its way to play a festival in Zurich, Switzerland. “He’s trying to pay his tab because we’re about to board our flight. And he’s just flailing!”

Just a week before this call, it was announced that Midland had been nominated for three honors at the 2018 Country Music Association Awards – for New Artist of the Year, Vocal Group of the Year and Single of the Year for the band’s breakthrough hit song “Drinkin’ Problem,” a ’90s country-sounding song that’s so good it just might convince you to skip rehab. And you can bet that the Midland fellas were on cloud nine upon hearing news of those noms, feeling pretty darn good about themselves and the fact that the whole country music industry clearly has its eyes on the band’s every move.

But here at the airport bar, just like any schlub, the band members – even after having already won the rival Academy of Country Music Awards’ Best New Vocal Group title earlier this year and having earned two Grammy nods a year ago — still can’t get the bartender to pay them any mind.

Nope, no one else cares about their soon-to-be-boarding flight. They’ll get their bills right after the person who asked before them, thankyouverymuch.

So, sure: Duddy laughs. But it’s only because life has a way of humbling you and bringing you back down to earth.

That’s something the Midland boys know well. For years, all three of the band’s members – Wystrach, Duddy and lead guitarist Jess Carson – each strove for the kind of fame and success they’re now enjoying. The strong-jawlined Wystrach had some real success as a male model, working on campaigns for the likes French fashion house Dior. Aspiring filmmaker Duddy also accomplished an impressive amount, having worked as the MTV Video Music Award-nominated, BET Award-winning music video director for pop star Bruno Mars’ hit “24K Magic” single. Carson, meanwhile, toiled away in the anonymity of various bands that never got off the ground, although his musician bona fides can be empirically proven these days. (Carson is the only member of the band with a solo songwriting credit – for the song “Cashin’ Check Country” – on the band’s debut On The Rocks LP. All others songs on that album feature not just the entire trio, but any number of additional songwriters.)

No matter their pasts, there’s no denying that the Midland gang never individually reached the heights it already has since its members formed Midland just about four years ago. Indeed, this impending trip to Switzerland, Wystrach declares in the same group phone call, isn’t the band’s first high-profiled run through Europe: “We went to Europe this past spring for the very first time,” he says. “We did about eight or nine shows in Ireland, Scotland, England and Germany — and we were also in Amsterdam. All the shows were sold out.” 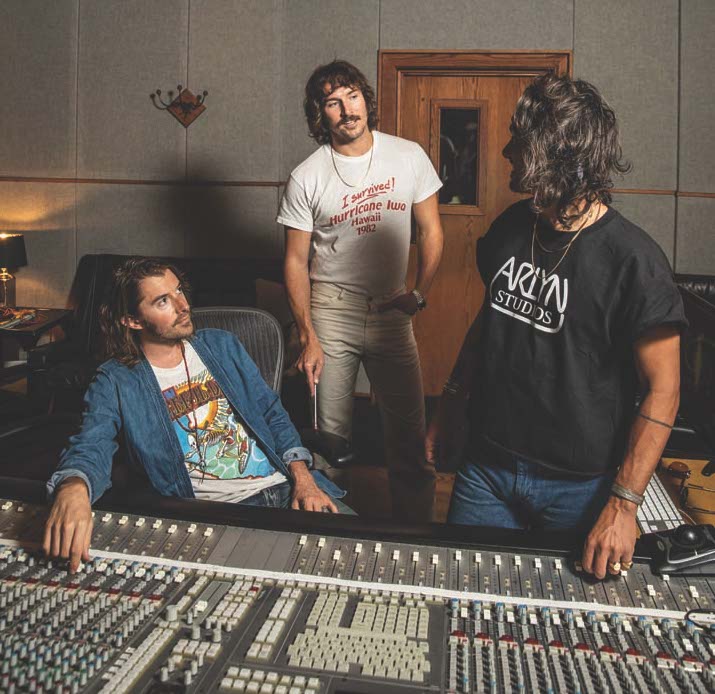 But to hear any one of the fashionable and highly stylized trio’s members tell it, it’s now clear to them that country music was always bound to be what would launch their celebrity. For all three members, the genre was just an omnipresent part of their upbringing.

Carson says country music was all around life as he grew up working on a Christmas tree farm in rural Oregon: “There was a large part of my life where I thought that’s what I was going to do – that I was going to be a farmer,” he says. “Growing up around that, country music is really the genre. Music and country music are kind of inseparable. So it was just always around, and I just absorbed ’80s and ’90s country from just being on the farm and living in a town that was 3,000 people and had one stoplight.”

The Los Angeles-based Duddy, for his part, thinks that his lifelong love for nature is where an interest in country songwriting seeped into his soul: “Fly fishing is one of my passions — even though I did just get skunked in Bozeman last week,” he says. “And country is just the perfect music for being outdoors.”

Wystrach, meanwhile, thinks his fate as a country musician was sealed when his parents bought a honky tonk called The Steak Out while he was still in the womb – an establishment, he notes, that his family still owns to this day. Remembers Midland’s lead vocalist of a younger time in his life: “We would be there as a family from Friday to Saturday to Sunday, just every night. And this was a pretty wild time! This was before cell phones, before the Internet and all that stuff. So this was a real gathering spot, a place for all these people to come to be entertained and to be inspired and to lose themselves from all their troubles and worries.”

The band’s members uniformly agree that once they decided to focus their music, those character-shaping memories connected Midland with audiences. And not just audiences here in the states, but ones awaiting them on the other side of this flight they’re trying to board to Europe.

It’d just be nice, Duddy says, if the band could do a better job of fitting the pasts that shaped their present into their increasingly cluttered future.

“In short order: Families, fishing and hunting — that’s exactly it, as our priorities go.”

“If we can figure out a way to see our families more, that would be really nice,” Duddy says just before hanging up and hustling over toward the band’s yes-now-departing flight. “In short order: Families, fishing and hunting — that’s exactly it, as our priorities go. Although I would like to say that fishing is hunting — just for the record. And, yes, I want that in print.”