by: Dustin Catrett
“Right there,” said my guide Mark Benson, pointing to a huge bass suspended above the grass cratered in golf balls.
“Can you see it?”
“Yes,”
“Cast past it, then bring your worm right in front of its nose.”
Just as my lure hits the water, I hear the distinct “clang” of iron striking a golf ball in the distance. Slowly I reel it up to the fish’s football sized head, where the offering vanishes into its cavernous mouth. I set the hook and the big fish thrashes out of the water violently shaking its head until splashing free. “Fore!” Shouts a golfer from down the fairway. “Nah, I’d say closer to ten!” jokes Benson, as we quickly take cover. “Reel up and let’s take a ride, I know where more like that are.”

Putting on the Ritz

Thinking back to my youth when getting caught sneaking onto the local golf course could result into an entire summer of home confinement, the reward was worth the risk to my fifteen year old rationale to just catch a few of the huge aggressive bass that lived there. What biologists refer to as “naïve populations,” where no matter what lure hung from the end of my line, those bucket mouthed monsters would devour it as if it were a wild shiner. Of course this momentary euphoria was usually cut short by a maintenance employee, or worse the course superintendent. Thankfully today there is a place that champions the magical pursuit of golf course bass fishing, and who would have guessed it takes place at one of Orlando Florida’s swankiest destinations – The Ritz-Carlton Orlando, Grande Lakes Resort. Over the last decade, the Ritz has begun a campaign to promote Florida’s natural attractions in the form of eco-tours, birding, and now trophy bass fishing. Through its Adventure Experiences Program, guests and non-guests alike can immerse themselves in the grandeur of this 500 acre Audubon certified resort while catching trophy sized Florida bass, and best of all there’s no more sneaking around.

Cruising the cart path in Benson’s custom bass buggy, equipped with rod holders, knobby tires, and even a camouflage hood wrap, the undulating fairways weaved between each lake were bordered with perfect lines of manicured spartina grass, native palmetto, oaks, and sabal palms where an abundance of deer, turkeys, and alligators abound. “We’re able to produce big bass here for several reasons,” he said, as we passed a group of whitetail deer quietly feeding just yards from the fairway. Benson, whose title is Director of Fishing for the resort, is also a certified Florida Master Naturalist and fisheries biologist with an extensive knowledge of lakes management and aquaculture. “First we have the largest strain of freshwater bass in the world, with only pure Florida’s on our property. They’re provided with a unique forage base of gizzard and threadfin shad that migrate into our lakes through a storm water system that’s interconnected with the Kissimmee River basin,” he explained. “We enhance these forage fish populations with a high protein pellet feed that’s dispersed through timed feeders on select lakes while monitoring largemouth growth rates through electroshocking surveys to maintain a balanced ratio of trophy sized bass. We’ve also placed sunken PVC structures with floating markers in specific lakes that guests can cast to from shore, and we maintain very low fishing pressure overall to optimize the angling experience.”

Guided clients are free to bring their own gear, or use the rods and reels provided by the resort. Benson typically outfits anglers with a 7′ medium action G. Loomis E6X spinning rod, that’s matched with a 3000 Shimano Saros FG spinning reel spooled with green 20-pound PowerPro braided line. Live bait is prohibited, instead soft plastics and sinking twitch baits are the norm for Benson’s guests fishing the course. Texas rigged D.O.A. plastic worms in junebug or purple and black, white Stanley Vibra-Wedge spinnerbaits, and Bill Lewis ½ ounce Rat-L-traps are Benson’s top three recommended baits for clients looking to land their personal bests. During spring sight fishing from the shore is common throughout summer, and Benson recommends that visiting anglers bring a hat, sunscreen, and a quality pair of polarized glasses for spotting fish during the warmer months. 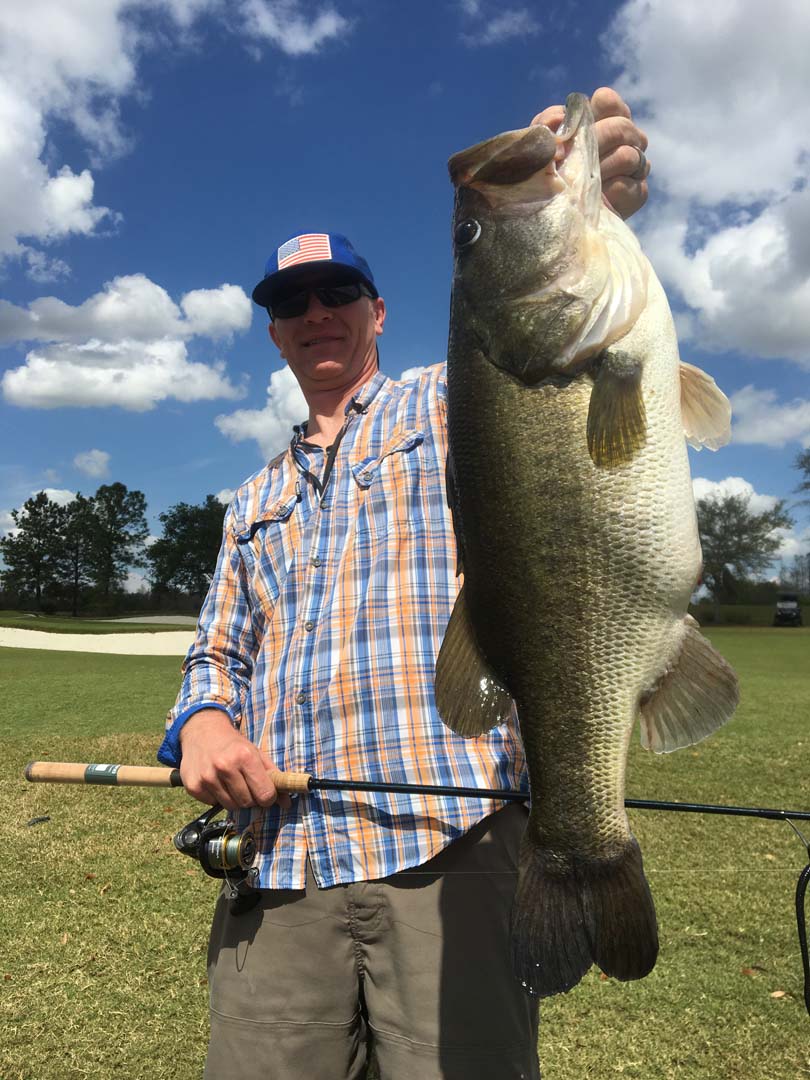 When to Come
Florida is an international tourist destination accommodating throngs of humanity year round, especially in the Orlando area. So forget about visiting during the slow season, because there isn’t one. However peak times for bass fishing at the resort are springtime during the spawn, which begins in early February and lasts throughout April, and Fall which starts around October when water temperatures begin to cool. “We also catch big bass during the heat of summer when folks are on vacation, especially during the early morning bite,” said Benson. Florida has some of the best bass fishing in the country, and while golf and theme parks will always take priority for most visitors, there’s now a place where all three can be experienced at once.